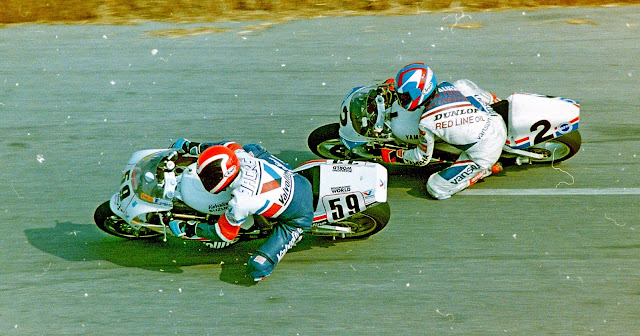 The American Motorcyclist Association out of Pickerington, OH. and WERA (Western Eastern Road Racing Association) out of Canton, GA. yesterday announced a partnership for the upcoming 2017 road racing season that will see the two long-standing sanctioning bodies teaming up to offer more possibilities for racers for the future ahead.

The two series (long before AMA/Ohio sold off Pro Racing sanctioning rights to AMA Pro/Daytona/DMG) have long seen riders and teams crossover from one series to the other, so this should see some nice dovetailing for current teams and riders for the road racing series. AMA/Ohio holds the FIM sanctions that the now reworked AMA Superbike Series operates under with the MotoAmerica racing series.

In the shot above, the late Donald Jacks on the #59 Roadracing World/Team Hammer/Valvoline Suzuki and Chris D'Aluisio on the #2 Southwest Motorsports/Dunlop/Red Line Oil Yamaha TZ250 battle during a WERA Pro Series Formula USA race at Indianapolis Raceway Park in Clermont, IN. in July 1992. The former Formula USA Series saw many crossovers from both AMA and WERA competition that would pit the Formula 2 250's against the big-bore 4-strokes of the day providing fans, teams and all in attendance with a wonderfully exciting racing platform.

Check out the press release below thanks to the American Motorcyclist Association and we wish the best to AMA and Evelyne Clarke's WERA associations for the great news and great racing assuredly ahead!

PICKERINGTON, Ohio -- December 9, 2016 -- The American Motorcyclist Association and WERA Motorcycle Roadracing have partnered to advance the sport of motorcycle road racing in America. Beginning with the start of WERA's 2017 season, all WERA events will be co-sanctioned with the AMA.

"WERA has produced a long line of impressive winners, and many of them have gone on to great success in the AMA Superbike Championship and beyond," said AMA Track Racing Manager Ken Saillant. "The professionalism and fairness demonstrated by WERA's leadership has always been exceptional, and the organization is an important partner for the AMA as we work to grow both amateur and professional road racing in this country."

With this partnership, WERA has access to AMA-approved insurance, AMA ratification and recognition of results, and the opportunity to develop a clear path to professional licensing for those riders who aspire to race with MotoAmerica, the home of the AMA Superbike Championship.

"AMA and MotoAmerica have worked hard and are succeeding in bringing growth to professional motorcycle road racing in the United States," said Evelyne Clarke, WERA owner and president. "Many WERA racers have a dream to compete on a professional level, so it is important to provide them the path to accomplish this, which is one of the things this partnership will do. The many benefits of an AMA membership are valuable to all WERA racers."

Clarke, whose history with WERA dates to 1976, added that the AMA's role as the country's premier motorcycling advocate also was important to the decision to sanction with the AMA.

"The AMA has long defended our freedoms to ride and race," Clarke said. "This includes uniting AMA members to help defeat the lead law ban on youth dirt bikes as well as stopping the more recent effort by the Environmental Protection Agency to prohibit the conversion of emissions-certified motorcycles into race bikes."

WERA, based in Canton, Ga., is one of the oldest and largest national sanctioning bodies conducting motorcycle races at road courses across the United States. Since 1974 WERA has enabled thousands of racers at all levels the opportunity to compete across the country. WERA offers a Rider's School with entry-level racing, pro-am racing and vintage racing for anyone with a motorcycle.

For more information on WERA, as well as the 2017 schedule of events, see www.wera.com.

About the American Motorcyclist Association
Founded in 1924, the AMA is a not-for-profit member-based association whose mission is to promote the motorcycle lifestyle and protect the future of motorcycling. As the world's largest motorcycling rights and event sanctioning organization, the AMA advocates for riders' interests at all levels of government and sanctions thousands of competition and recreational events every year. The AMA also provides money-saving discounts on products and services for its members. Through the AMA Motorcycle Hall of Fame in Pickerington, Ohio, the AMA honors the heroes and heritage of motorcycling.
For more information, visit www.americanmotorcyclist.com.
Not a member? Join the AMA today: www.americanmotorcyclist.com/membership/join