Tickets Now on Sale for AMA Pro Flat Track Grand National Championship Round 10 at the Indy Mile on Friday, August 8 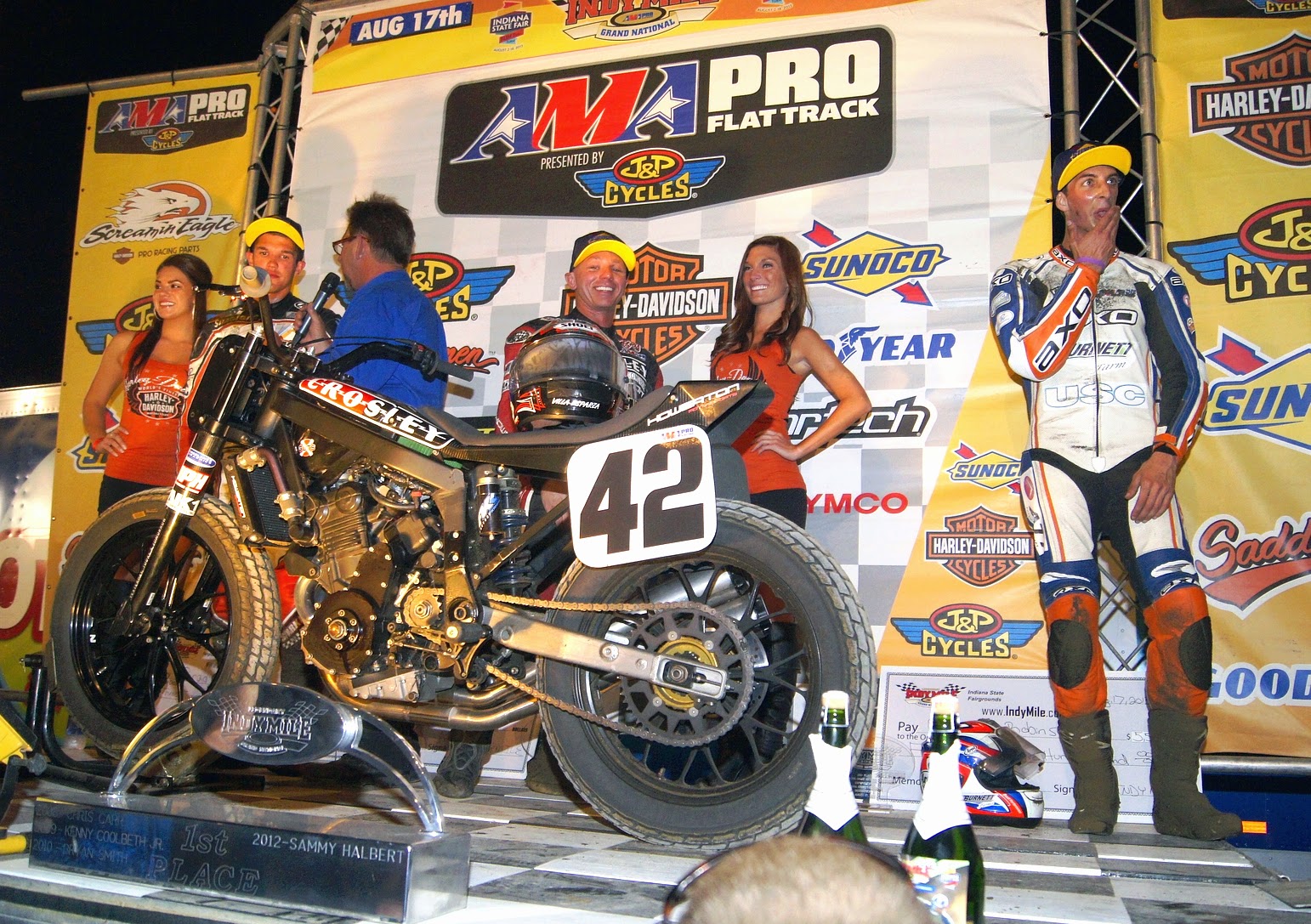 It's now time to start thinking about getting your tickets to one of the best events on the 2014 AMA Pro Flat Track Grand National Championship schedule as Family Events announced today that tickets are now available for sale for round 10 of the season at the legendary Indy Mile for Friday, August 8.
As was announced late last year, the Indy Mile will this year run on the Friday night of the Red Bull Indianapolis MotoGP weekend in order to better handle the traffic, parking and overall logistics involved with trying to run a race of this magnitude on the weekend of the MotoGP race down the road at the Indianapolis Motor Speedway as well as during the running of the Indiana State Fair. Tickets start at just $31/each which also includes admission to the fair.
In the shot above from last year's running of the Indy Mile, winner Bryan Smith beams on the podium behind the #42 Crosley Radio/Howerton Motorsports Kawasaki rocket that he rode to his first win at Indy since taking the initial win for Kawasaki in AMA Pro Flat Track Twins Series competition while riding for the Werner-Springsteen Kawasaki team in August 2010. Smith got Indy resident and the builder of the #42 machine, Rick Howerton, his first win at the fabled facility in front of his hometown fans, which to the long time fan of flat track racing was like a dream come true.
Also seen in the shot from the podium celebrations on August 17, 2013 is AMA Pro Flat Track official announcer Barry Boone as he interviews 3rd-place finisher Brad Baker and 2nd-place finisher Brandon Robinson. The beautiful trophy which is awarded to the winner of the Indy Mile can also be seen on the podium just in front of Smith's machine.
Whatever you do, don't miss your chance to see the stars of The Rolling Thunder Show perform at the Indiana State Fairgrounds mile oval this year, an event that can only be described as possibly only being second to witnessing the action at the Springfield Mile, and to some of us hometown boys, actually has ranked above the mecca of speed in Springfield for over five decades now.
You can check out the full press release below from Family Events, with all of the info and links to get yourself, your family and your friends all set to see what will surely again be another nail biter at the Indy Mile on Friday, August 8. Let's get ready to rumble!
Press release courtesy of Leah Burdette and Family Events, the great people and promoters behind the running of the legendary Indy Mile.