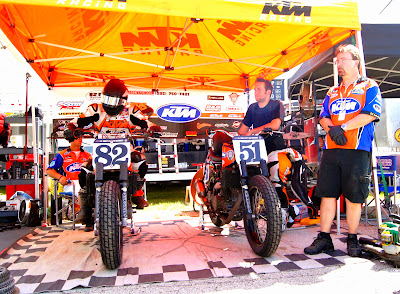 Dave Waters, owner and team manager of the Waters Auto Body 'Project K' KTM AMA Pro Flat Track team, checks out the action on the track as riders Jeremy Higgins #82 and Steve Murray #51 get ready for their first practice session at round 4 of the 2012 AMA Pro Flat Track Harley-Davidson Insurance Grand National Championship presented by Motorcycle-Superstore.com season at the Springfield Mile I on May 27.

The team has retained Murray to campaign the #51 KTM North America/Waters Auto Body Racing/Bell Helmets/Arlen Ness-sponsored KTM LC8-based Twins Series mount for the upcoming 2013 season in what will be his second year with the team, while Higgins will be stepping aside for the year after riding for the team the last three seasons. 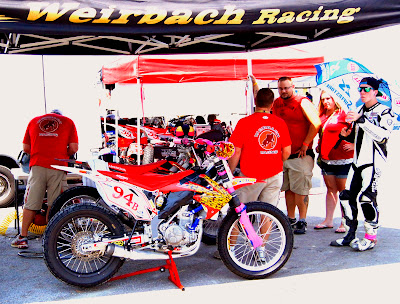 Rider Ryan Wells tries to cool off while the Iowa-based Weirbach Racing team goes about getting the #94B Weirbach Racing/General Engineering/Barnett/Spectro-backed Honda CRF450R ready to go for round 5 of the 2012 AMA Pro Motorcycle-Superstore.com Pro Singles Championship season at the Lima Half-Mile on June 30.  In spite of missing out on five rounds in the 2012 season (Daytona Short Track I and the last four rounds of the season), Wells, a former AMA Horizon Award winner, still finished the year ranked as the 7th-place rider in the 'feeder' Pro Singles Championship class.

As was announced this week, Wells will be hooking up for the 2013 AMA Pro Motorcycle-Superstore.com Pro Singles Championship season with fellow New York residents, Dave & Rhonda Waters, to campaign the Pro Singles class aboard their Waters Auto Body machines.

You can check out the full press release below as we wish the Waters Auto Body team and riders Steve Murray and Ryan Wells good luck for the upcoming 2013 season as we look forward to seeing them hit the track this year!


Dave & Rhonda Waters are proud to announce their support of Flyin’ Ryan Wells to the Waters Autobody/Project K Racing Team for the 2013 Pro Singles Series.  Ryan has always shown the drive and determination required that it takes to become a championship rider and it is our pleasure to be able to help this young man and his family strive for the Pro Singles Championship in 2013.

Ryan Wells, the 2012 Daytona short track winner, has shown us that after being injured mid-year when he was not able to achieve the success he had aimed for that he has learned, grown and worked hard to overcome some of the obstacles that stopped him from attaining that goal.  He has been training all winter and we have seen that first hand. 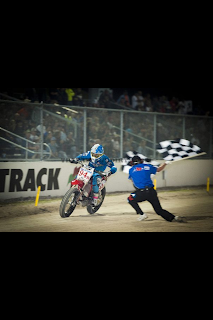 Ryan Wells is shown taking the checkered flag on the #94B Weirbach Racing Honda at round 2 of the 2012 AMA Pro Motorcycle-Superstore.com Pro Singles Series season at the Daytona Short Track II.  Wells will be riding for the Waters Auto Body team in the 2013 season.  Photo courtesy of the Waters Auto Body AMA Pro Flat Track team.


“Dave & I have always tried to help the riders in our area excel in the sport.  In keeping with that tradition, Wells is a natural fit and we are excited about the future of the team and all the possibilities.  Our thought is Ryan & Steve will compliment one another with each other’s experiences and bring a friendly yet competitive atmosphere.”

Ryan had this to say regarding the team, “I am very excited to be working with the Waters Autobody/Project K Racing team as I feel we will communicate and work together well as a team.  I also feel having Steve Murray as a teammate will be a great learning step for me on and off the track.”

Piloting the KTM’s for the AMA Expert Twins season will be the sole pilot Steve Murray for a second year.  Jeremy Higgins has decided to curtail his race schedule for the upcoming season and dedicate more time to other aspects of his personal life.

“Dave and I would like to express our gratitude and thanks to Jeremy and the Higgins family for the past three years.  Jeremy & Jack have given so much input over the years that have helped our team to continually make changes to bring the KTM’s closer to the goal of making mains week in and week out.  We can never thank them enough for all the hard work, long hours and lasting memories that were made and we wish them the best for 2013.”