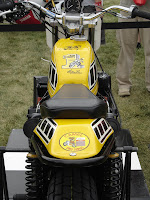 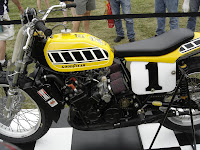 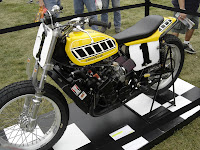 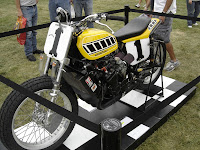 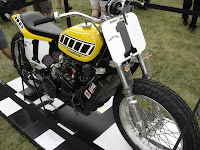 As many of you already know, and have seen, Kenny Roberts made an
appearance at the Indy Mile on Saturday 8/29/09 aboard his infamous
Yamaha TZ-750 flat tracker that he used to win the event back in August of 1975.
With a great crowd on hand, the folks at Yamaha brought out a VERY nice
replica of the bike that now stands in infamy as one of the premier motorcycles to ever win an AMA Grand National Flat Track event. The bike was displayed during the w/e at the Indy round of the MotoGP race at Indianapolis Motor Speedway, and did it ever draw the drools from young and old--myself included.
After having been there on that fateful evening back in August of 1975, seeing, let alone hearing it again after all these years, brought the same chill to my body as it did over 34 years ago. Not only did Yamaha not dissapoint, but neither did 'The King' when he rolled out of the pits to take a few 'hot' laps on the old beast!
All along, figuring that The King would just run a few straight blasts and take it easy in the corners, the crowd, let alone myself, was awe-struck when he blasted down the straights and threw it into the corners almost as blazingly fast and furiously as he did all those years ago! The crowd was absolutely thrilled, and
I myself jumped for joy as he managed to wrangle the old beast through the turns as if it was yesteryear all over again. To put in into the words of Larry Lawrence from http://www.theriderfiles.com/, it 'was a magical evening' to say the least, one that everyone that witnessed will remember forever. The King has
NOT lost his touch, and he not only wowwed the crowd with his skill at throwing the old beast into the corners and jamming it down the straights, but he even talked for awhile afterwards about what it was like that night, as well as
THE night from almost 3 1/2 decades ago!
I shot the above shots in the vendors area at IMS on Friday afternoon 8/28/09 while Yamaha had it on display at their tent during the GP. They truly represent what a fine replica this particular one is. And the fine folks at Sideburn mag posted these short videos and story about that night as well:
http://sideburnmag.blogspot.com/2009/08/indy-mile-update.html
Long live The King, and long live one of the greatest stories, motorcycles, and
races that ever were.
And thanks to the great folks at Yamaha, and Sideburn for the link, for making this all possible!
Here is another link of that great nite posted from YouTube.com:
http://www.youtube.com/watch?v=qSupEffWQtU
And here is a link to a smattering of videos leading up to, and including, this great event:
http://www.youtube.com/results?search_query=kenny+roberts+indy&search_type=&aq=f