AMA Pro Flat Track: IMDA Postpones Springfield Mile I Round to Labor Day Weekend, Watch the 2012 Race to Hold You Through the Weekend

One thing you learn after watching and going to races for over five decades is, you can't fight Mother Nature, and unfortunately she won out this Memorial Day Weekend.

Just over an hour ago, the Springfield Mile I, what would have been round 4 of the 2013 AMA Pro Flat Track presented by J&P Cycles Grand National Championship season, was officially postponed due to heavy rain in the area for the last 24+ hours that soaked the track and forced the IMDA to postpone the event until the Labor Day Weekend on August 31.

Fans, teams and sponsors had waited patiently at the Illinois State Fairgrounds as weather had been a factor since early yesterday, leaving the mile oval soaked and causing this unfortunate delay in what surely would have been a stellar event at the long running event.

So now the Labor Day Weekend will feature a doubleheader weekend, with two mile National main events on Saturday, August 31 and Sunday, September 1, 2013.


Here is the official release from the Illinois Motorcycle Dealers Association that was posted on their Facebook page just over an hour ago:

DAYTONA BEACH, Fla. (May 26, 2013) - The AMA Pro Flat Track presented by J&P Cycles race scheduled to run on Sunday, May 26, 2013 at the Springfield Mile has been postponed due to inclement weather. 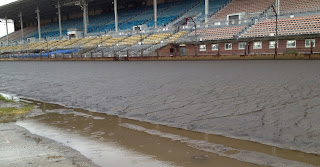 A soaked race track awaited attendees today at the Illinois State Fairgrounds mile oval, forcing postponement of the Memorial Day weekend races until the Labor Day weekend.  AMA Pro Flat Track photo by Dave Hoenig.
Officials from AMA Pro Racing and the Illinois Motorcycle Dealers Association (IMDA) announced that the event, which was scheduled to take place today at the Illinois State Fairgrounds in Springfield, Ill., has been rescheduled for August 31, 2013 in what will be a Labor Day weekend doubleheader of Grand National Championship racing, as the second running of the Springfield Mile will take place the following day on September 1.
In addition to the two Grand National Championship races set to be held this fall, the IMDA will be running an amateur Short Track on Friday, August 30, 2013. For additional information, please visit the IMDA's website at http://www.illinoismda.com/.
About AMA Pro Flat Track presented by J&P Cycles:
AMA Pro Flat Track presented by J&P Cycles is a national motorcycle racing series in North America and is considered one of the oldest forms of motorcycle racing. Sanctioned by AMA Pro Racing, the Series is highly regarded as the most competitive form of dirt track racing in the world. The 2013 schedule consists of rounds on the country's finest flat track courses. For more information on AMA Pro Flat Track presented by J&P Cycles, please visit http://www.amaproracing.com/ft/.
About AMA Pro Racing:
AMA Pro Racing is the premier professional motorcycle racing organization in North America, operating a full schedule of events and championships for a variety of motorcycle disciplines.  Learn more about AMA Pro Racing at www.amaproracing.com.

So, in the interests of keeping the proverbial juices flowing for the day, you can at least watch last year's Springfield Mile I courtesy of AMA Pro Flat Track and their video page from YouTube:


In the shot above from round 4 of the 2012 AMA Pro Flat Track Grand National Championship season at the Springfield Mile I, Willie McCoy on his #59 Harley-Davidson of Wausau/Independence H-D-sponsored XR750 runs alongside Jake Johnson on the #1 Zanotti Racing/Schaeffer's H-D-backed XR in the run to the checkers on the 25th and final lap of the National main.

Bryan Smith on the #42 Crosley Radio/Howerton Motorsports Kawasaki, Jared Mees on the #9 Rogers Racing/Blue Springs H-D XR and Johnny Lewis on the #10 Scott Powersports/Saddlemen Seats Kawasaki all try to get the advantage in the run to the checkers in front of what was a packed house at the Illinois State Fairgrounds on May 27, 2012.

Next up is the Lima Half-Mile at the Allen County Fairgrounds on Saturday, June 29.