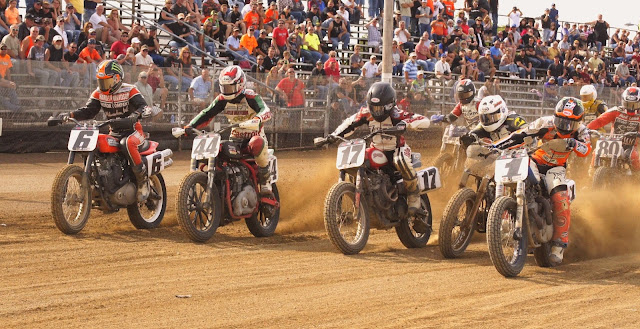 SMI Promotions, the promoters of round 3 of the 2016 AMA Pro Flat Track Grand National Championship season in Austin, TX has announced that tickets are now on sale for the COTA round of the series scheduled for Saturday, April 9. This will be the first points-paying event at the new facility after The Rolling Thunder Show's initial appearance at the facility in early June '15 as part of the ESPN XGames. The new track will also be designed by 7-Time AMA Grand National Champion Chris Carr.

And AMA Pro Flat Track has completed the 2016 schedule with the addition of a new facility in Central New York State. Central New York Raceway Park has been added to the schedule for round 12 of the season on Saturday, August 20, located in the Syracuse, NY area. The new track is touted as a 'new state-of-the-art' facility due to it's new and innovative surface.

In the shot above, racers roar off the line during one of the restarts during round 5 of the 2015 AMA Pro Flat Track Grand National Championship Harley-Davidson GNC1 presented by Vance & Hines series at the Allen County Fairground on June 28.

With the new signing of the NY facility, this makes 14 rounds for the 2016 season.

You can read all about where and how to get your tickets for the COTA round next month and the NY track addition in August below thanks to AMA Pro Flat Track's official press releases.