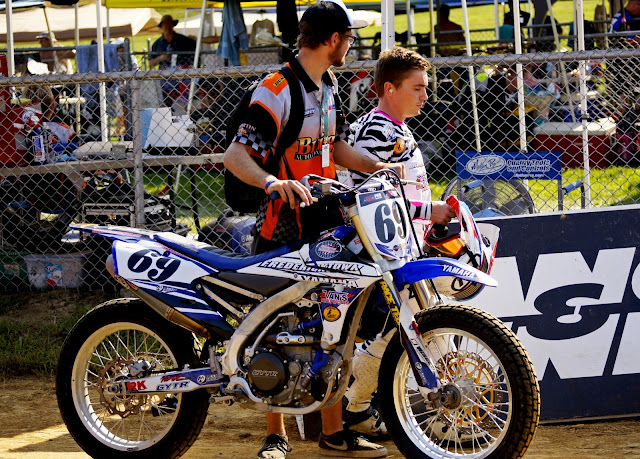 The long wait for the opening rounds of the 2016 AMA Pro Flat Track Grand National Championship Harley-Davidson GNC1 presented by Vance & Hines series is finally over and it did not fail to keep us on the edge of our seats as two seasoned veterans managed to keep the young kids in tow and take the wins on Thursday and Friday nights.

In Thursday night's season opener at Daytona Beach, Sammy Halbert took win on his #69 Van's Yamaha and led all comers right from the drop of the green flag. The Slammer was never headed throughout the just-over eight minute Grand National main and managed to take the win over 2nd-place finisher Brandon Robinson by just over 1.3 seconds. 2013 AMA Grand National Champion Brad Baker rounded out the podium just shy of 1.6 seconds in arrears of BRob44.

Although the track was rough and rutted (in what seems like a usual occurrence at Daytona since moving to the Speedway in 2010), but Halbert let that play into his advantage to take his first win in Grand National competition since the 2013 season.

In the shot above, Halbert gets some help from the #69 Fredericktown Yamaha/Van's Yamaha/Lucas Oil-sponsored Yamaha YZF450 team while rolling out for the rider intros portion of round 10 of the 2015 AMA Pro Flat Track Grand National Championship Harley-Davidson GNC1 presented by Vance & Hines season at the Peoria TT on August 16.

While Halbert was checking out and hauling the mail, Bryan Smith on the #42 Crosley Brands/Howerton Motorsports-backed Kawasaki was ripping through the field after being forced to win his semi race and start in the 14th-place spot on the grid. Flyin' Bryan put in what was arguably the ride of the night to bring home a very solid 5th-place finish for him and the Indy-based team and earned the MotoBatt Hard Charger award (and some solid points) for his fine efforts. Smith finished just shy of 1.7 seconds in arrears of title rival Jared Mees.

Also of note, Peoria 11-Time winner Henry Wiles, riding for his new USC/Hart Racing team, was forced to use a provisional to start in the 19th-place slot on the grid and was able to bring his new Honda ride home in the 12th-place spot. 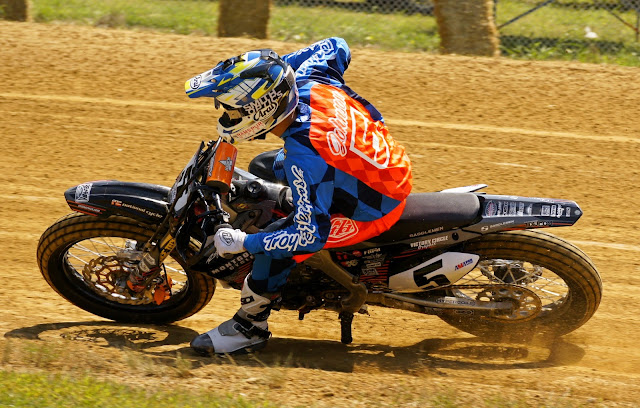 In last night's rout, 2-Time AMA Grand National Champion Jake Johnson's return to Zanotti Racing was just what the doctor ordered for the personable former champ as he was able to get around early leader Halbert on the fourth lap and was gone on the #5 Zanotti Racing Honda CRF450R from that point on.

Stretching his lead to nearly 2.6 seconds over eventual 3rd-place finisher Halbert, JJ5 took advantage of the slick and smooth surface (in stark contrast to Thursday's track surface) and held the front position for the final 22 laps of the 25-lap National main. Johnson's team mate, Kenny Coolbeth, Jr. was able to get around Halbert as well towards the end of the race and finished in the runner-up spot, just over 1.8 seconds behind to make it a Zanotti Racing sweep.

Another provisional was used last night, this time by Bryan Smith on the #42 Howerton Motorsports Kawasaki after failing to make the cut in his semi earlier in the evening. Smith would have earned himself another Hard Charger Award for his valiant 8th-place finish, just ahead of defending AMA Grand National Champ Jared Mees on the #9 Rogers Racing Honda, but Brad Baker on the #6 Brothers Powersports Honda sliced his way through the field after a 17th-place start to earn a hard-fought 4th-place finish. JD Beach rounded out the top-5 for round 2 on his #95 Team 95 Yamaha.

In the shot above, Jake Johnson on the #5 Montgomeryville Cycle Center/JM9/Ramspur Winery-sponsored Honda CRF450R puts his team mate's for the day Jared Mees ride through the motions during the final qualifying session at round 10 of the 2015 AMA Pro Flat Track Grand National Championship Harley-Davidson GNC1 presented by Vance & Hines season at the Peoria TT on August 16.

With two of the three Singles events in the rearview mirror, Halbert leaves Daytona with the points lead with 40 points and Johnson just three points behind. After 2-6 finishes on the #44 Kennedy Racing Honda, Brandon Robinson sits in the 3rd-place spot with 32 points, Baker in fourth with 31 points and Coolbeth, as a result of his 9-2 finishes for the season openers in fifth with 29 points. Mees and Smith are tied for sixth with 25 points apiece, which is a great start for the Michigan rivals and especially for Smith who has left Daytona the last couple of years with a huge deficit to make up for later in the season.

Thankfully we don't have too long to wait for round 3 as the riders and teams head to Austin, TX for the Circuit of the Americas round on Saturday, April 9 in just four short weeks, where the big boys and girls bring out the big hardware for the start of what can really be called the real season ahead alongside the Red Bull MotoGP COTA round.

A big congrats to Slammin' Sammy and JJ5 for their wins and to all of the competitors for a great double bill of racing the last two evenings. Good job had by (most) all and we're looking forward to the season to get into full swing in just 28 days!

You can get the full rundown of the races from the last couple of nights below thanks to AMA Pro Flat Track, who put on a good show for the fans in Daytona.