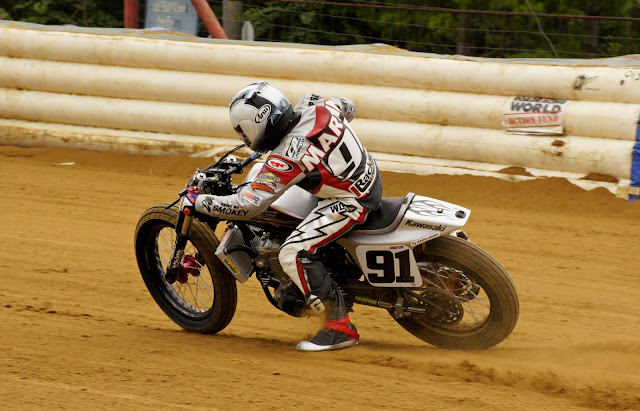 2011 AMA Pro Flat Track Pro Singles Champion Mikey Martin and the Iowa-based Weirbach Racing team came away from the last round of the AMA Pro Flat Track Grand National Championship at the legendary Indy Mile with their first top-5 finish and Martin's best-ever finish of his young career of 4th-place.

Indy was a mash-up of 'hurry up' all day, as storms working their way towards the Circle City from Eastern Illinois appeared to be imminent as the early evening program progressed. As a result, AMA Pro Flat Track put the show on in 'quick mode' doing away with one practice session altogether as well as the semi races part of the evening's races. Although all of those 'imminent' storms broke up completely before getting within 20 miles of the Indiana State Fairgrounds-hosted event, the shortened program proved to be advantageous to several riders and teams. Martin and the Weirbach team were one group of individuals who capitalized on the race's 'hurry up' mode.

After qualifying in the 'lucky 13' spot (shown above during one of the qualifying sessions at Indy on the #91 Weirbach Racing/Racing Unlimited/Flat Track Live/Barnett-sponsored Kawasaki EX650-based 750 effort), Martin was able to take advantage of his top-6 heat race finish (5th-place in GNC1 heat #1) and put the team's slick looking Kawasaki into the main right out of the gate.

With the three red flags brought on by crashes including Shawn Baer, Henry Wiles and Jeffrey Carver, Jr., Martin was able to work his magic on each of the resulting restarts to slowly work his way into the top-5, eventually taking his best-ever effort of 4th-place and moving himself into the 15th-place spot in the championship points standings, and giving himself and the team their third top-10 for the year on their freshly-rebuilt Kawasaki.

With Indy being the halfway point of the season, the team is looking to improve on their finish and hopes to be able to start off the second half of the racing season on a positive note on Tuesday night in Black Hills, SD at the Black Hills Half-Mile.

Congrats to Martin and the Weirbach team for a fine finish, these guys have worked hard to get where they are at and deserve this hard-fought finish. Check out their brief press release below and when you get to the races, make sure you stop by the Weirbach Racing pits and tell them 'hi' and wish them luck on their great team efforts!

After a very disappointing outing at the DuQuoin Mile, we focused our effort on the Indy Mile to redeem ourselves.

There was a big threat of storms in the Indianapolis area so a very short program was run by AMA Pro Racing. After qualifying 13th we took a short break and headed right into the heat races. 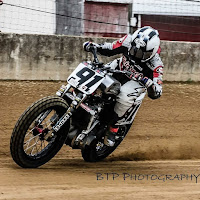 Mikey Martin on the #91 Weirbach Racing Kawasaki is shown during one of the qualifying rounds at the Indy Mile on July 11, 2015. Photo courtesy of Weirbach Racing by Brent Pierce/BTP Photography.


The pressure was really on to transfer direct to the main as there would be
no semi races today.  After a bad start Mikey managed to finish 5th and that
would put him on the 3rd row for the main event. There were three red flags that
led to three restarts, and with each one Mikey improved his overall position
on the track. He successfully worked his way into a very solid 4th-place when the
checkered flag waved.

We will be headed to Rapid City, SD for a half-mile Grand National on August
4th, so if you are at the Sturgis Rally please stop by our pit area so we can
thank you for all the support.