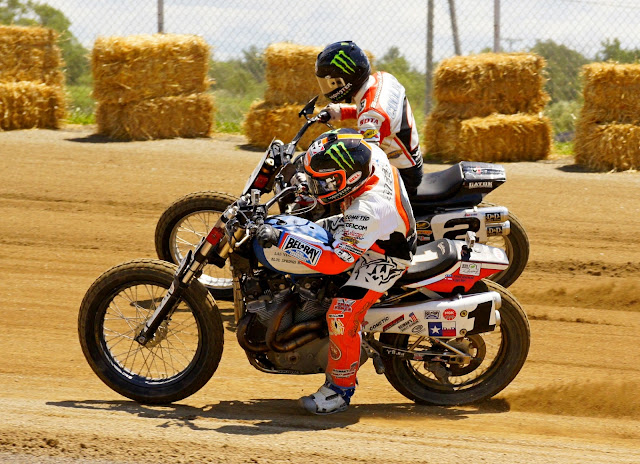 Defending AMA Grand National Champion Jared Mees leads the charge in the title hunt for the 2015 AMA Pro Flat Track Grand National Championship as the series has the weekend off before heading to round 10 of the season at the Charlotte Half-Mile next Saturday, August 29. Mees has held his stranglehold on the championship chase since taking over from early-season points leader after the completion of the Lima Half-Mile in late June, and after his runner-up showing behind winner Henry Wiles last weekend at the Peoria TT, increased his lead in the championship to 29 points over title chaser Bryan Smith (156-127 points.)

Mees incredible season, that looks to take him to his third overall championship to add to his 2009 Twins Championship title, includes seven top-3 finishes in the nine rounds that have been run, including his first win of the season at the Black Hills Speedway in South Dakota on August 4. The Jammer's worst finish of the season, an 11th-place finish at Daytona II, is the lone dark spot on a championship run that also includes other finishes on the year of no worse then 4th-place (Lima Half-Mile.)

In the shot above, Mees on the #1 Las Vegas H-D/Rogers Racing/Harley-Davidson Motor Co.-sponsored XR750 runs with Kenny Coolbeth, Jr. on the #2 Zanotti Racing/H-D Motor Co./Gator H-D-backed XR750 during one of the qualifying rounds for the Lima Half-Mile on June 28 in round 5 of the 2015 AMA Pro Flat Track Grand National Championship Harley-Davidson GNC1 presented by Vance & Hines class.

Charlotte was visited by The Rolling Thunder Show back in the early '00s for a three year string, and at one time was run alongside the World of Outlaws sprints. Jake Johnson and Coolbeth are two of the currently active riders that raced in Charlotte during one of more of the runs back in those days.

You can check out more on the upcoming race at Charlotte below thanks to SMI, the promoters of the Charlotte Half-Mile next Saturday, and if you are in the area the race should be a definite 'must see' on any race fan's list, let alone a fan of the greatest racing series on two wheels in the world!

Press release courtesy of SMI, the promoters of the Charlotte Half-Mile

CHARLOTTE, NC (Aug. 21, 2015) – Defending AMA Pro Grand National Champion Jared Mees is hoping to continue his strong surge to what he ultimately hopes will be another title, as the series thunders into Charlotte Motor Speedway’s The Dirt Track at Charlotte for the Don Tilley Memorial Charlotte Half-Mile on Saturday, August 29.
Mees, 29, from Clio, Michigan, sports the No.1 on his Rogers Racing Harley-Davidson after winning his third AMA Pro Grand National Championship last year. The always steady Mees brings a four-race podium finish (top three) streak coming into Charlotte that includes a victory at the Black Hills Speedway in Rapid City, South Dakota, earlier this month. The run of solid finishes has pushed Mees’ series lead to 29 points over fellow Michigan rider Bryan Smith. Sammy Halbert, of Graham, Washington, is also very much in the championship hunt as well in third, just three points behind Smith.
The Don Tilley Memorial could prove to be instrumental in this year’s title chase. Mees is aiming for another solid finish and hopes to expand on his lead, while those chasing him like Smith and Halbert are going to go all out on the red clay Half-Mile dirt oval to close the gap on the series leader. 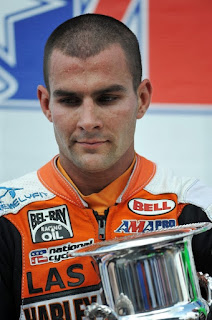 “Things are heading in the right direction,” Mees said. “Even though I’ve got a pretty good lead in the championship you’re never satisfied. This is racing and we all know anything can happen. I’m looking forward to racing at Charlotte.”
All but a handful of veteran riders will be seeing The Dirt Track at Charlotte for the first time. This year’s Don Tilley Memorial Charlotte Half-Mile marks the return of national motorcycle racing to the facility, part of the Charlotte Motor Speedway complex in Concord, NC. The AMA Pro Flat Track Series last visited the facility in 2002. Among the current crop of riders who raced Charlotte before include former champs Kenny Coolbeth, Jr. and Jake Johnson. Both of those riders have fond memories of the track and are happy to return.
“I’m really looking forward to coming back to Charlotte,” Coolbeth said. “I remember it as one of the best Half-Mile tracks we ever visited. The thing that’s really nice about it is that it’s a racy track, there were a lot of different lines and a lot of good passing opportunities.”
Coolbeth twice finished runner-up at Charlotte and he hopes that in the return he can finally score the victory that he was so close to earning.
Johnson scored a podium finish (third) in the last race here in 2002. He was in semi-retirement this summer before being called up by the Harley-Davidson factory team to fill in for the injured Brad Baker. He’ll also be considered one of the pre-race favorites for next week’s national in Charlotte.
“I had some success there in my rookie season,” said Johnson, a two-time AMA Grand National Champion from Coatesville, Pennsylvania. “That kind of track is right up my alley. I’ve got a great team behind me and I’m really looking forward to it.”
In addition to the elite riders of the AMA Pro Grand National Championship, Charlotte fans will also get to watch the top up-and-coming flat track racers in the country competing in the GNC2 support class. There will also be a chance to meet and get autographs from three of the most famous riders who ever raced for Don Tilley. Jay Springsteen, Gene Church and Tripp Nobles will all be on hand to honor their former racing boss Don Tilley, the well-known tuner and Harley-Davidson dealer from Statesville, North Carolina, who died in an accident last year.
The AMA Pro Grand National Championship series is one of the longest running motorcycle racing championships in the world. Known by its fans as flat track racing, many consider this form of motorcycle racing the most exciting on the planet. Flat track racing has produced many of America’s Motorcycle Grand Prix Champions such as Kenny Roberts, Eddie Lawson, Wayne Rainey, Kenny Roberts, Jr. and Nicky Hayden.
Practice for the Don Tilley Memorial Charlotte Half-Mile begins at on Saturday, Aug. 29 at 2:00 p.m. and opening ceremonies for the evening program kick off at 6:00 p.m.
Visit us at: http://www.charlottehalfmile.com/ Via Facebook: https://www.facebook.com/DonTilleyMemCharlotteHM Twitter: https://twitter.com/tilleymemorial info@charlottehalfmile.com
—
*** 2015 Ticket Information: Ticket information is available for the Aug. 29, 2015 Don Tilley Memorial Charlotte Half-Mile at www.charlottehalfmile.com
Fans can order tickets online at http://www.charlottehalfmile.com/tickets/, by calling the Toll Free Ticket Hotline 1-800-745-3000.
Tickets for groups of 20 or more also are available. Contact the Don Tilley Memorial Charlotte Half-Mile Group Sales Department at info@charlottehalfmile.com or call 1-844-722-6453 for more information.
---------------------
Larry Lawrence
c. (317) 332-3899
SMI Media Rep
Sacramento Mile - May 30
Charlotte Half Mile - Aug 29
Las Vegas Finals - Nov 20
lawrencemedia@hotmail.com