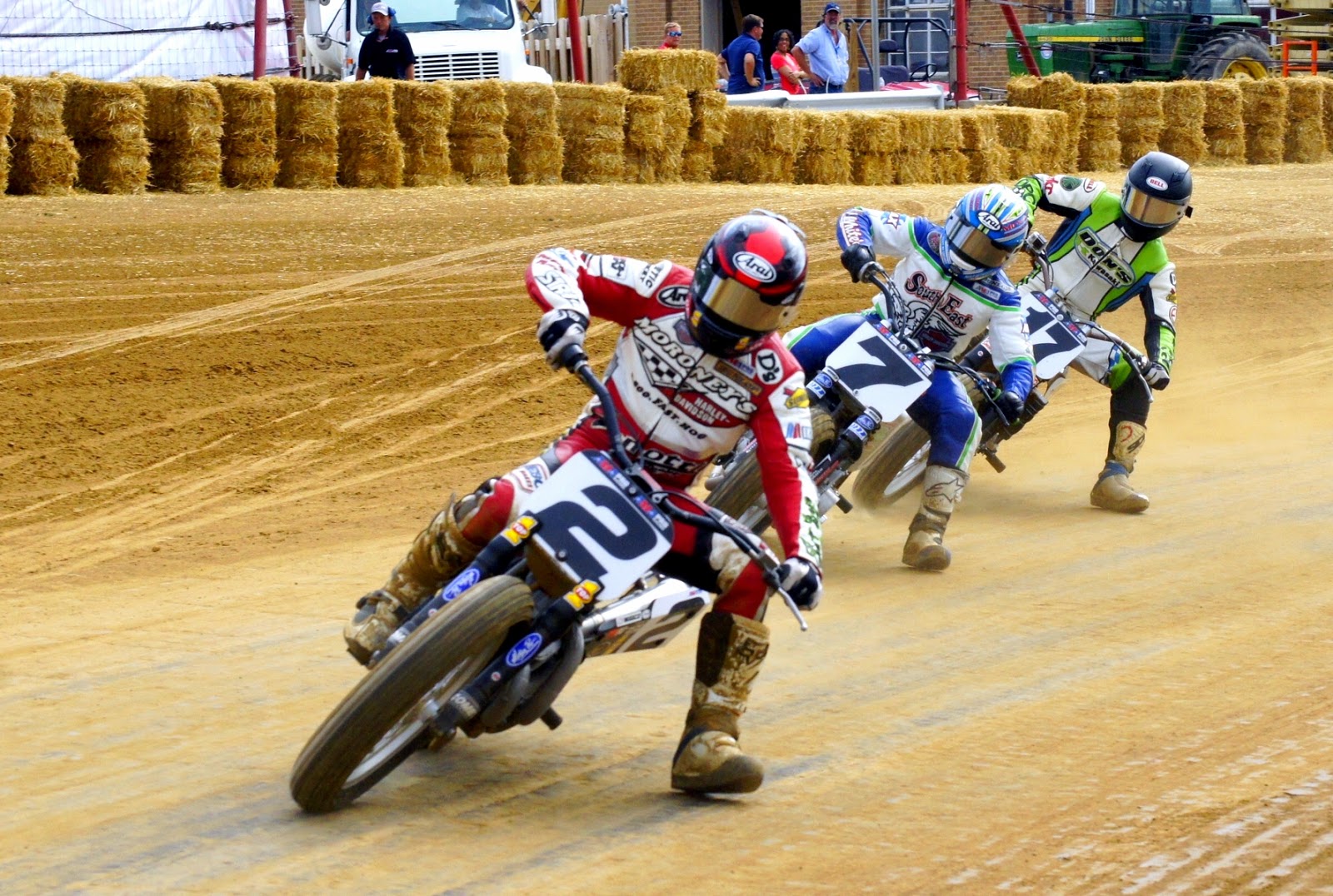 AMA Pro Racing out of Daytona Beach, FL. announced earlier this week the resigning and signing of two associate sponsors for the AMA Pro Flat Track Grand National Championship. Howe Enterprises was announced as resigning for the next two seasons as the Official Apparel partner of AMA Pro Flat Track through the 2016 season, and City National Bank will sponsor the "Long Haul Award" for the 2015 season that will pay the qualifying rider $500 bonus monies who traveled the farthest to compete in an AMA Grand National event. City National's total outlay for this season will be in the neighborhood of $80K in bonus money.

In the shot above, Kenny Coolbeth, Jr. on the #2 Zanotti Racing/Moroney's H-D/Burt Ives Honda-sponsored Harley-Davidson XR750 leads Sammy Halbert on his #7 South East H-D/White's H-D/Specialty Fabrications-backed Kawasaki EX650 and Henry Wiles on the #17 Don's Kawasaki/DPC Racing/EA Racing-sponsored Kawasaki during the final qualifying session at round 11 of the 2014 AMA Pro Flat Track Grand National Championship season at the legendary Indy Mile on August 8. Coolbeth went on to qualify 2nd, win his heat race, took 2nd in the Dash for Cash and then ran away and hid in the 25-lap Grand National main held at the Indiana State Fairgrounds under the lights alongside the Indiana State Fair.

AMA Pro Racing has been doing a stellar job of signing on associate sponsors this season, helping to drive up the payouts, contingencies and bonus cash to be paid to the riders in The Rolling Thunder Show this season, which will definitely help pay some of the bills along the way to compete in the greatest racing show on two wheels in the world. Good on you guys for helping out the riders and a big thanks to Howe Enterprises and City National Bank for stepping up to the plate to help out the series, teams and riders to offset the high costs of racing.

Check out the full press releases below courtesy of the sanctioning body on Fentress Blvd. in Daytona.