AMA Pro Flat Track Grand National Championship Round 3 of the 2014 Season Set to Roll Off Tomorrow, Sunday May 25 and FansChoice.TV to Bring You All the Action 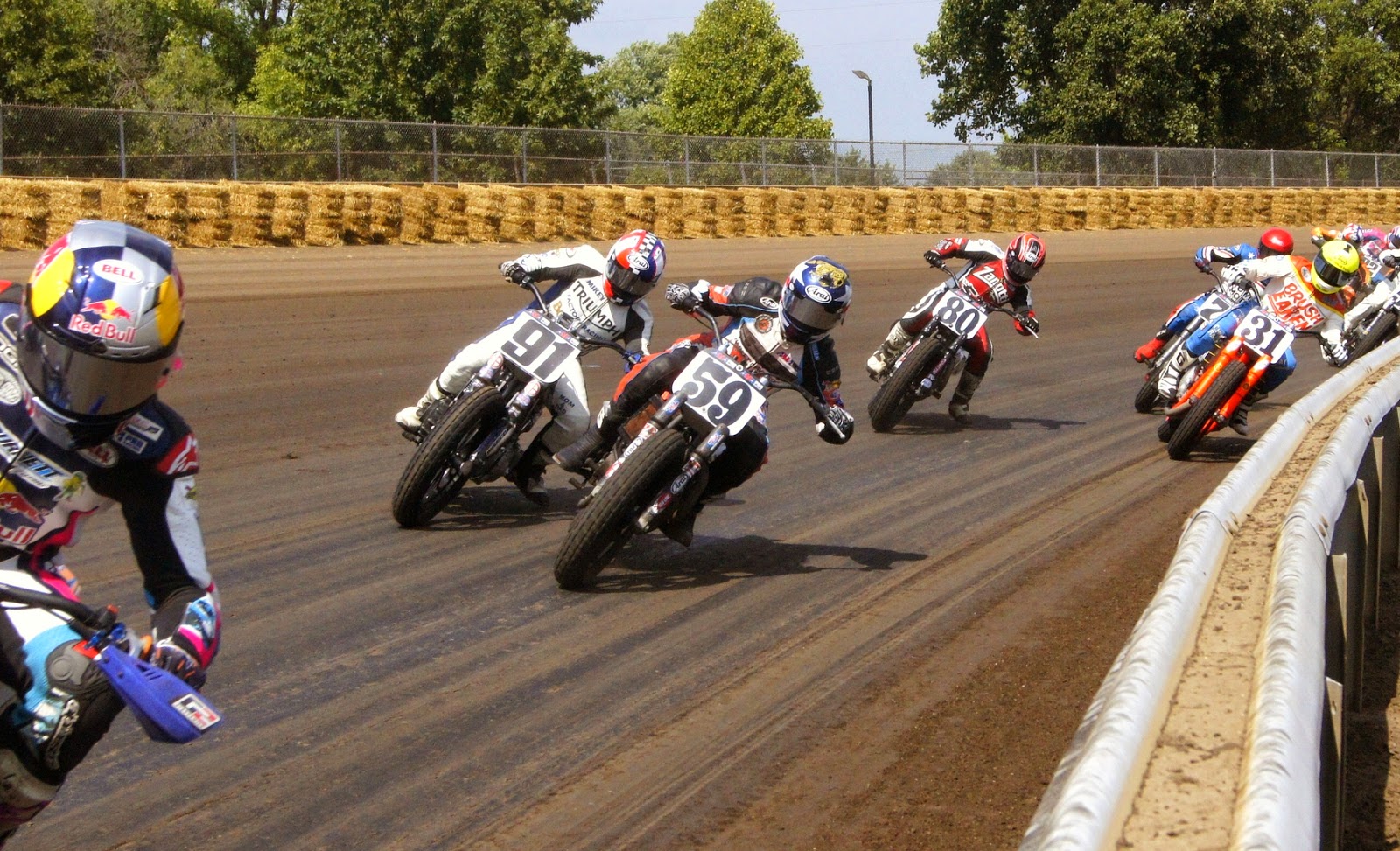 In just over 12 hours, the first event in the 2014 AMA Pro Flat Track Grand National Championship Twins Series will take to the track for the first round of practice at the Springfield Mile I in round 3 of the season, and the buzz has never been bigger for the fans and throngs of followers the world over with all of the team changes and the first race in decades to see the restrictors removed from all of the bikes.

Just taking into consideration the restrictor removal from The Rolling Thunder Show's big twins, no rider in current competition has ever ridden without the limitations of horsepower output, and massaging the beasts at over 135mph on the Illinois State Fairgrounds will take a slight of hand and will also see the very best in tire and suspension tuning come out from the men who turn the wrenches for each and every rider and their mounts. And the riders will need to learn to finesse the throttles in order to make their tires last through a grueling, bar-to-bar battle in the 25-lap National main. Sheer horsepower alone will not be atop the podium once the final checkers fall tomorrow afternoon.

Hopefully, you will be able to make the race, but if not, FansChoice.TV will bring you all of the action straight to your home with a full complement of video coverage that will commence from the first green flag of the first practice session tomorrow morning at 11:15 AM EDT/8:15 AM PDT and lasting right until the last word is spoken during the winner's ceremonies straight from the podium.

In the shot above, JD Beach on the #95 TJ Burnett Farms/Red Bull Kawasaki leads the pack out of turn 4 during heat race #2 on lap one at the Springfield Mile I during round 10 of the 2013 AMA Pro Flat Track Grand National Championship on Saturday, August 31.

Keeping it real behind the eventual 3rd-place finisher in both of last year's events at the Illinois State Fairgrounds are Mikey Martin on the #91 Bonneville Performance/Factory Triumph and eventual heat #2 winner and double Springfield Mile winner Willie McCoy on his #59 H-D of Wausau/Independence H-D XR-750.

Battling for the final direct transfer to the National main are Stevie Bonsey on the #80 Zanotti Racing/RGR XR, Dapper Dan Ingram on the #31 Brush-Eaken Racing/Dick Ford Kawasaki and Canada's own Doug Lawrence on the #73 R&J Racing/CVC Communication Agency XR-750. All of these riders eventually made their way to the big show that day and put on another stellar version of some high-speed bar banging and drafting that left the crowd on hand roaring their approval. 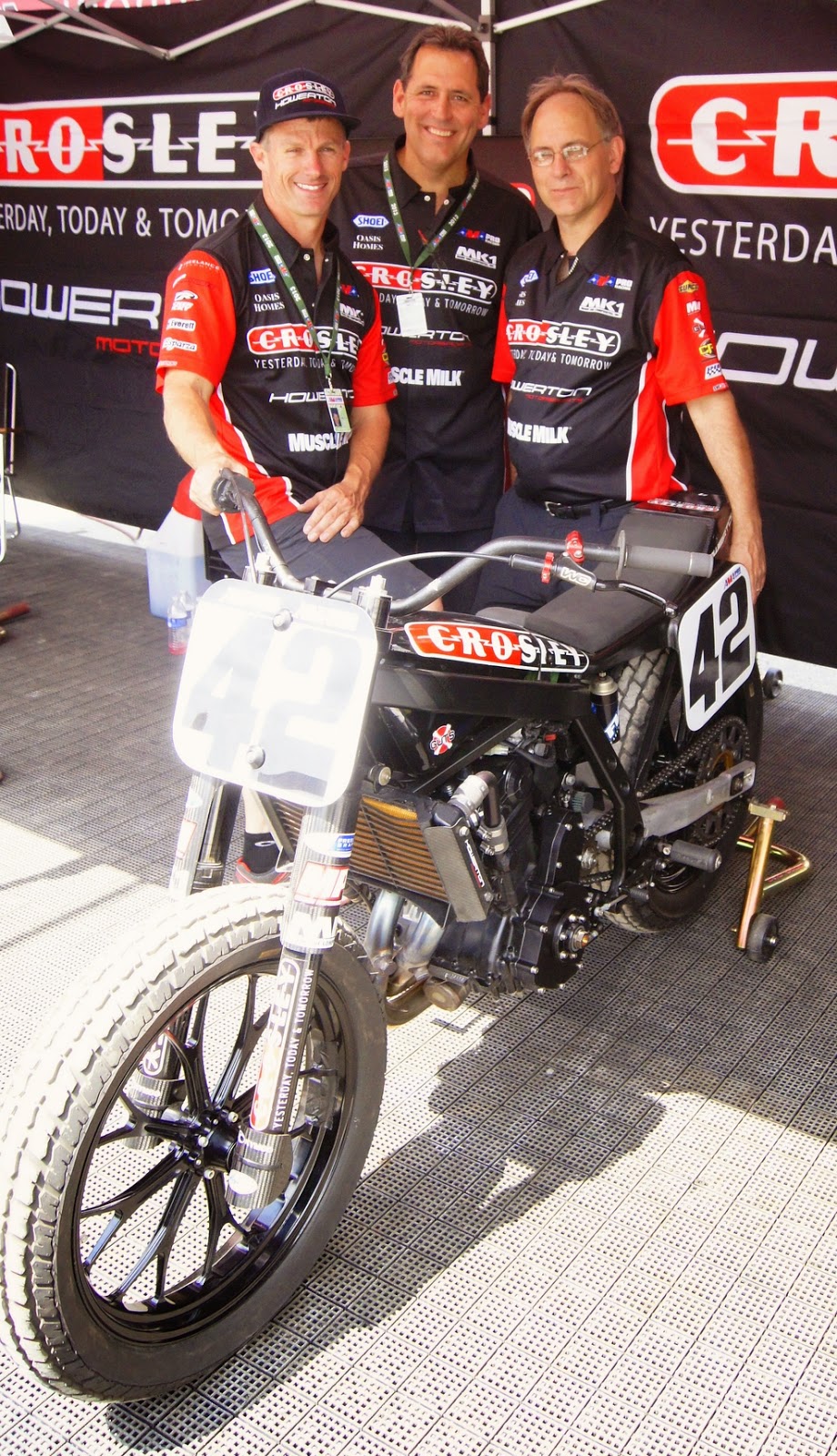 One of the biggest surprises of the off-season saw double AMA Grand National Twins Champion Bryan Smith left without a team, as tuner/builder/engineer/team owner extraordinaire Ricky Howerton decided to mothball the team in order to spend more time with his family and growing (quickly) sons.

But in a great turn of events, former stooge and second-man wrench and Howerton co-hort Jeff Gordon will be taking Flyin' Bryan and the #42 team forward beginning with tomorrow's first of six mile events this season. Gordon will spearhead the effort along with the other original members of the Howerton Motorsports team (you can read more about it here in Larry Lawrence's Cycle News interview with Smith on page 60) in what will be the original bike Smith raced the last two season for the team, but with a C&J chassis instead of the Howerton frame built by the IndyCar/NHRA/USAC and AMA Pro Flat Track fabricator.

In the shot above, Howerton and Gordon, along with team member Dink Glidden, flank the #42 Howerton Motorsports/Crosley Radio rocket Kawasaki at the Indy Mile on August 17 of last season. Crosley Radio will also be back on board with the team again this season and will try to help them all win another Twins Championship, and with a little luck and prayer, possibly the big crown as well. 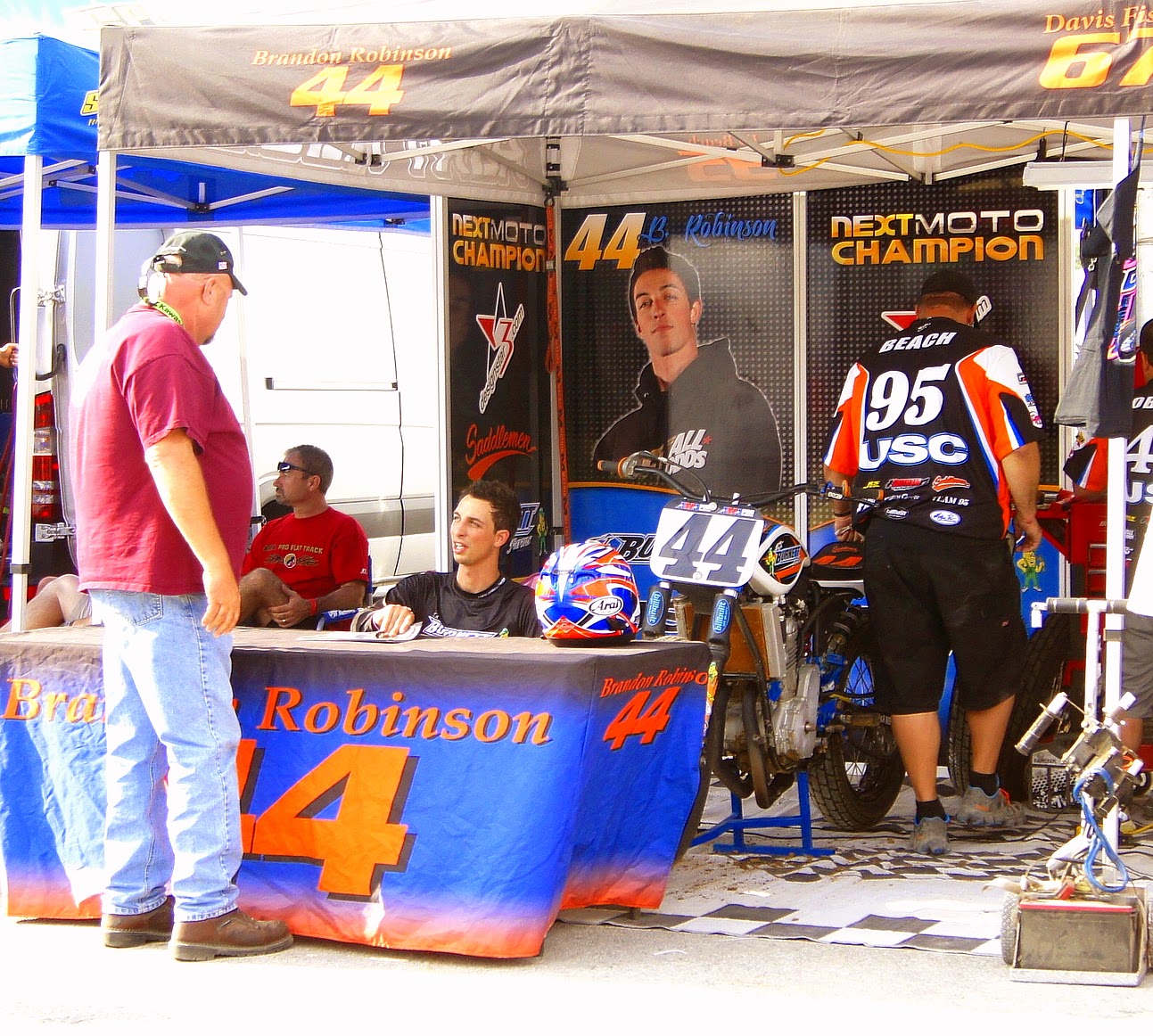