A Special Thanks to Florida Steve @ The Great 2-Stroke Biker Blog! 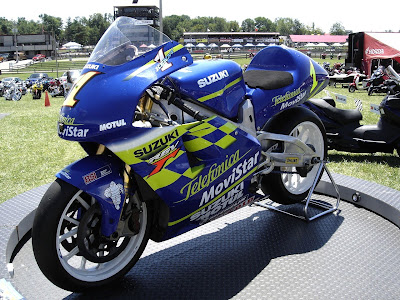 I wanted to give a shout out to Florida Steve, who runs two of the best motorcycle photo display blog sites around the net. Steve's sites 2 Stroke Biker Blog and Motorcycle Photo of the Day are some of the best gathering spots on the net to peruse some of today's (and yesterday's) machinery of the two-wheeled variety. And that's what we're all about, right?!

Steve took the time to post a few more of my shots of the KRJR Suzuki from the '01 season on his site the other day, and being as how I am just getting caught up here I wanted to give him a big tip of the helmet and 'Thanks Man!' to let him know how much I appreciate him showcasing my work on his sites.

Here's the link to the post on the Big Blue Suzuki 500:

Here's the link to the old site:

And here is the link to the new and improved site, which he has managed to move everything from his original site to: