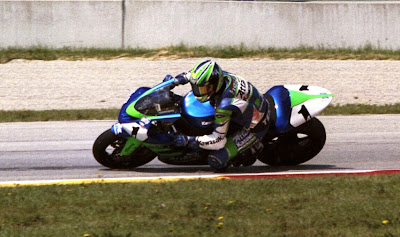 After waiting out a rain delay on Monday and losing most of Tuesday to damp conditions and early morning fog, the assembled AMA Pro Road Racing teams finally got onto the newly-paved Daytona International Speedway for the Dunlop Tire Test, the first official open test session in advance of the upcoming 2011 season.

Topping the timesheets in the AMA Pro National Guard SuperBike class was reigning champion Josh Hayes on his Yamaha, posting a time of 1:38.795/127.901 MPH. Right behind Hayes was Tommy Hayden on his Suzuki with a time of 1:39.074/127.542 MPH. Hayden's teammate Blake Young was third, and debuting Kawasaki's new liter-bike was Eric Bostrom, who finished fourth. Another rider showing well on a new combination was Larry Pegram, who posted the fifth-fastest time with his new BMW.

Debuting entirely new team-and-machinery combinations were Ben Bostrom and Roger Hayden, both showing well for Jordan Motorsports' 2011 effort. 2010 AMA Pro Daytona SportBike Champion Martin Cardenas made his debut in the SuperBike class and ended up eighth, just ahead of his Team M4 Suzuki teammate Chris Ulrich, who had to depart the track early to return home for the impending birth of his second child. Rounding out the top ten was the Buell-mounted

"The track is just so unbelievably smooth; when you compare some of the data from previous years, it is so much smoother," Hayes commented on his day. "It is different, but it doesn't take long to get back into the groove. I'm looking forward to the race."

In preparation for the Daytona 200, the Daytona SportBike riders took to the track for one session, which was interrupted by a brief sprinkling of raindrops. Jason DiSalvo initially set the fastest time, returning to the series aboard the Team Latus Ducati, but ultimately settled for third. Jake Zemke, new to the Project 1 Atlanta team this year, finished second on his Yamaha with a time of 1:51.987/93.225 MPH. Last year's Daytona 200 pole-position winner and 2009 Daytona SportBike Champion Danny Eslick also appeared at the top of the timesheets at numerous points during the disjointed session, but it was P. J. Jacobsen who topped the times after the short break with a best lap of 1:51.822/93.362 MPH on his new Ducati. Suzuki-mounted Cory West rounded out the top five, while Santiago Villa, who ran well early in the session, ended up sixth overall.

Next up was AMA Pro SuperSport Young Gun East Division champion J.D. Beach, showing well on the new middleweight Kawasaki by finishing sixth in his first appearance in the Daytona SportBike class. Dane Westby also made his first appearance with a new team, the Team M4 Suzuki rider finishing up eighth. Ninth was Paul Allison on his Yamaha, and Taylor Knapp finished tenth on a Suzuki.

"We were pretty happy with how everything went today," Jacobsen reflected on his day. "I think the track feels smooth as glass, and of course we're really happy being on top. [Eraldo] Ferracci is great; he's been around for a really long time and really, really knows his stuff, so I'm happy to be riding for him and Barry [Gilsenan]. I also really like the Ducati 848 EVO. It has a lot of torque and it's a good machine, nice and fast, smooth. I'm real happy with the bike."
Due to the abbreviated schedule as a result of the weather delays, the SuperSport riders were included in the Daytona SportBike session. Taking the top spot was Eric Stump, enjoying his first ride on the new pavement at the historic circuit in Daytona Beach and posting a fast lap of 1:55.846/90.119 MPH. Seven SuperSport riders took part in the session. "I was really liking the new surface, it's way better than last year," Stump said. "Motor-wise, we don't have our good Daytona motor yet, so it's only going to get better come race time."
Making a debut on the Daytona track was the AMA Pro Vance & Hines XR1200 Series, with former Harley-Davidson 883 series rider Michael Barnes celebrating his first ride on the new XR1200 by posting a time of 2:09.568/80.576 MPH to take the top spot. Nine XR1200s participated in the shortened session that saw champions from a variety of AMA Pro Racing disciplines make their mark. Recently-retired AMA Pro Flat Track Grand National Champion Joe Kopp topped the timesheets for part of the outing, two-time AMA Pro Supermoto Champion Chris Fillmore ended up second overall and 2009 SuperSport Young Gun West Division champion Ricky Parker made his return to AMA Pro Racing to finish up third fastest.

"I'm one of the few guys out there who actually raced the old 883 series back in the day," said Barnes. "I just remember great battles, a lot of parity and eight-wide across the tri-oval. I think we're going to see the same kind of exciting race here in March."
Approximately 50 riders participated in the only full pre-season test held prior to AMA Pro Road Racing's 2011 season opener, held at Daytona International Speedway March 10-12. The riders were unanimous in their praise of the newly-paved track, and after having to wait out the inclement weather, everyone was delighted to have a chance to sample the new track surface. That in addition to the many new team, rider and machinery combinations points to an even more exciting AMA Pro Road Racing Series in 2011.

Thanks to David Swarts at Road Racing World.com for the story of the test and AMA Superbike test times overall. Hayes on his Graves Yamaha and Tommy Hayden on the Yoshimura Rockstar Suzuki were right where they left off at the end of the 2010 season, first and second:

Road Racing World.com also has the test times for the Daytona SportBike Class. J.D. Beach ended up 7th in his debut on the Attack Performance Kawasaki ZX-6R after having ridden in the AMA SuperSport Class in the 2010 season. Jake Zemke, in what is being reported as a 'one-off' ride with the Project 1 Yamaha team (unless more sponsorship comes into their program) timed in second behind P.J. Jacobsen on the Celtic Racing/Ferracci Ducati:

...and they also have the AMA SuperSport and Vance & Hines XR1200 test times can be found here. Recently retired 2000 AMA Flat Track Grand National Champion Joe Kopp was on hand and was reported to have headed up the time sheet at one time during the XR class' somewhat shortened session:

And here is Henny Ray Abram's story on the tire test from Daytona over at Cycle News.com: