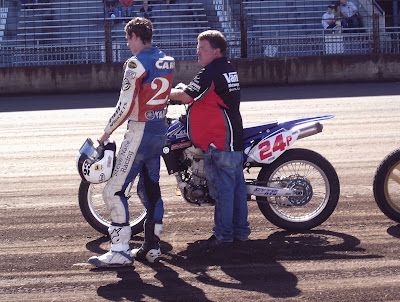 
Jeffrey Carver, Jr. took home the laurels this weekend and didn't even have to turn a wheel as the AMA Pro Flat Track K&N Filters presented by Motorcycle Superstore.com Grand National Championship Series was washed out at Knoxville. After postponing the event to Sunday, the AMA Pro Flat Track team--and riders and fans--were hoping to be able to get the races in, but Mother Nature was cruel to the series and just after 1000 CDT the whistle was blown to pull the plug. And apparently that wasn't that bad of an idea as several hours later it was reported that the fog was still heavy enough at the famous Knoxville Raceway that you couldn't see parts of the half mile track. The series resumes in Prescott Valley, AZ. on Saturday, October 9th for the season ending mile event.

But the great news from the weekend was Jeff Carver locking up the AMA Pro Flat Track Motorcycle Superstore.com Pro Singles Championship as a result of his now-insurmountable 27 point lead in the championship standings. As a result, the Alton, IL. resident takes his #24P Van's Yamaha/Woody Kyle Racing/Yamaha Motor Corp/Moose Racing-sponsored Yamaha 450 on to the Arizona round as the 2010 AMA Pro Flat Track Pro Singles Champion. And quite an accomplishment at that with his record of 5 wins and 11 podiums this year in the 15 rounds that have been run thus far.

AMA Pro Flat Track has the official story of the cancelation at Knoxville, and has a word on Jeffrey Carver winning the 2010 AMA Pro Flat Track Motorcycle Superstore.com Pro Singles Championship. I'm sure much more will come when he is officially crowned in Arizona. It's unfortunate that the round got canceled out to where he could have been awarded the #1 plate yesterday instead of having to wait for the three weeks until the AZ round. But I'm sure the party will be going on in their camp after the Arizona mile round is over late afternoon on October 9th!

Here's a nice little interview with Jeffrey over at Fight For Dirt Track that was posted after the Canterbury Park round and getting ready to go to the now-canceled round in Knoxville. Thanks to Tyler for the great work and this great interview over at FFDT: