CALISTOGA, Calif. (September 29, 2015) - The Ramspur Winery Calistoga Half-Mile presented by Triumph, originally scheduled as Round 13 of the 2015 AMA Pro Flat Track schedule, has officially been canceled.
Officials had previously announced that the event had been postponed, as Calistoga Speedway was being used as an evacuation center for those displaced by the wildfires in California. However, despite the best efforts of all involved, it was not possible to identify a suitable rescheduling date at the facility.
"First off, our hearts and thoughts are with the people that have had their lives irreparably changed," said Terry Otton, on behalf of the event promotion team. "Despite all of our efforts and everything we were willing to do, we just couldn't get it done. We're sorry for our fans, and we're really looking forward to 2016 and planning our future events." 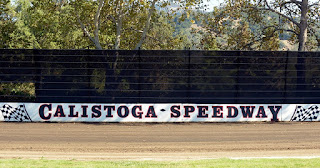 "This has been a very trying time for people in the Northern Napa Valley region and we continue to send our thoughts and prayers their way," said Michael Gentry, Chief Operating Officer of AMA Pro Racing. "While we regret that we are unable to bring the sport to the community in 2015, we look forward to returning to Northern California in future seasons to put on great racing for our many fans in the area."
Fans who purchased pre-sale tickets for the 2015 Ramspur Winery Calistoga Half-Mile presented by Triumph will be offered a complete refund. For more information, please visit http://www.flattrackcalistoga.com/ or call 888-718-4253.
The 2015 season will conclude on November 20 with the AMA Pro Flat Track Finals at the Orleans Arena in Las Vegas. The AMA Pro Flat Track season finale is part of a big doubleheader weekend, which will also feature the inaugural Superprestigio of the Americas on Saturday night Nov. 21, an event bringing together the leading AMA Pro Flat Track racers to compete against top domestic and international riders from other disciplines of motorcycle racing. For tickets and information, please visit http://www.superprestigio.com.