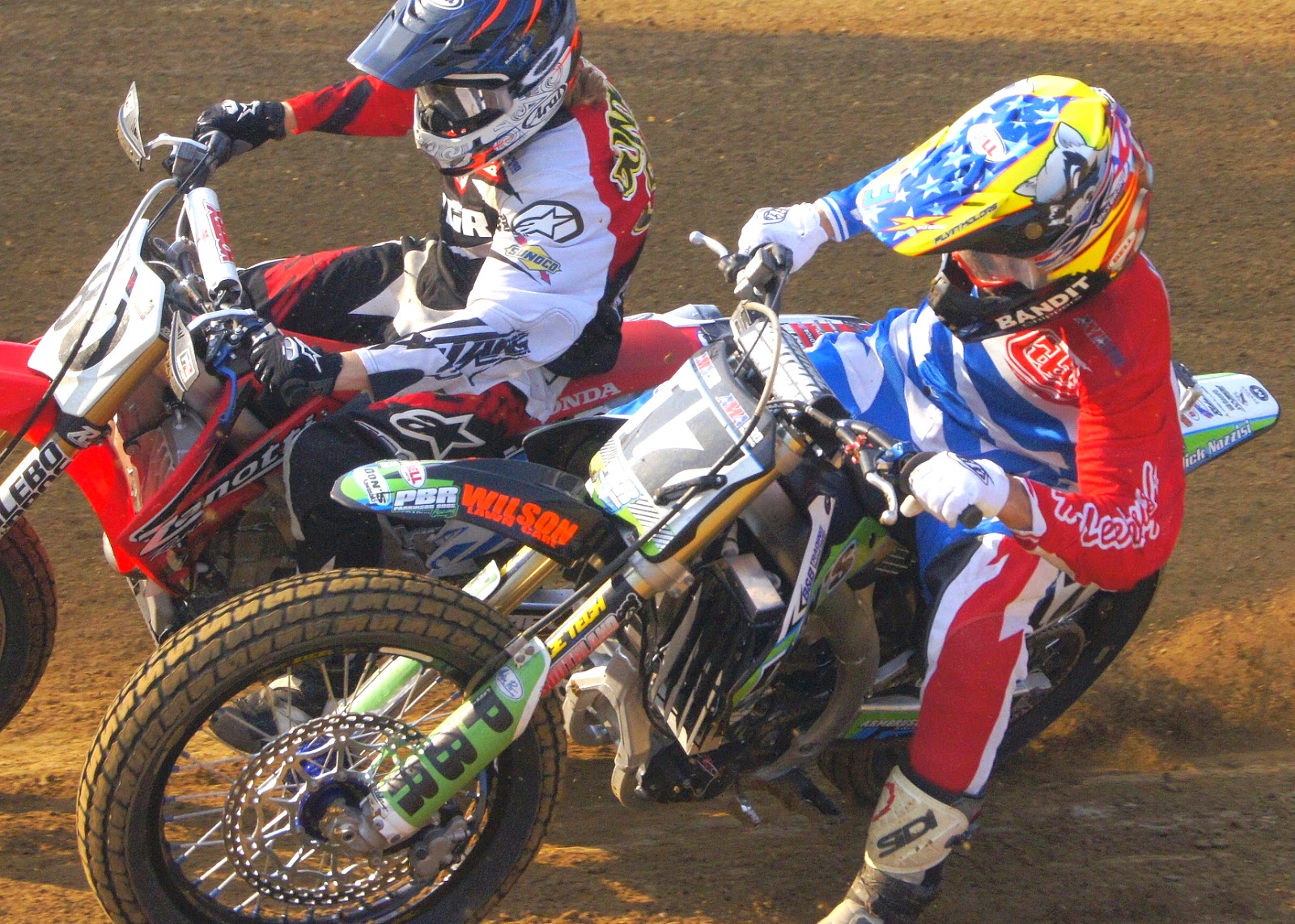 2-Time AMA Grand National Singles Champion and 9-Time Peoria TT winner Henry Wiles came through late in the race last night to take his 25th-overall Grand National win in round 9 of the 2014 AMA Pro Flat Track Grand National Championship. Wiles and his #17 Don's Kawasaki worked his way around early race leader Mikey Rush to make the pass and lead the final eight go-arounds to take the win by over 4.2 seconds.

Hammerin' Hank has made a big name for himself on the 450cc-based Singles Series machines since the class was restructured several seasons ago, taking the 2009-2010 Singles Championship and now owning the all-time win record in-a-row at Peoria and now-defunct Springfield TT and Short Track Nationals. He will look to better his record in just two short weeks as the series will head back to Peoria on Sunday, August 17.

In the shot above, Wiles, on the #17 Don's Kawasaki/Ramspur Winery/DPC Racing-sponsored KX450F makes the inside pass on Stevie Bonsey on the #80 Zanotti Racing/RGR/Arai-backed Honda CRF450R during his romp through the field at the Peoria TT in round 7 of the 2013 AMA Pro Flat Track Grand National Championship on August 11. Wiles went on to take his record-breaking ninth win in-a-row at the track he has owned since his first win inThunder Valley in 2004.

There were some changes in the points battle last night with Bryan Smith finishing in the 10th-place spot and Jared Mees taking home a 4th-place. Mees leads the championship again over Smith (165-159 points) with last night's 7th-place finisher Jake Johnson hanging onto 3rd-place in the points standings (154 points.)

2013 AMA Grand National Champion Brad Baker rounded out the podium (his first of what has been a very rough season for the Washington State resident) and local boy and favorite Sammy Halbert finishing in the 8th-place spot to move ahead of Kenny Coolbeth, Jr. for 4th-place in the championship (134 points) after KC (129 points) failed to make his second TT event in-a-row (Coolbeth missed last year's Peoria as well.) And Brandon Robinson parlayed a provisional start to take a 14th-place finish to remain in the 6th-place slot in the championship hunt (115 points.)

And you can watch the race from Castle Rock here thanks to AMA Pro Flat Track and FansChoice.TV.

The series has what is one of the shortest breaks between races in some time as it winds it's way out of the Northwest towards Badlands country as it makes it's first appearance in several years at the Black Hills Speedway for Tuesday night's round 10 at the Black Hills Half-Mile as part of the Sturgis bike week festivities, before heading to the Indy Mile on Friday, August 8 for round 11 of the 2014 AMA Pro Flat Track Grand National Championship season as part of the 7th Annual Red Bull Indianapolis MotoGP weekend of speed in and around the Indianapolis area.