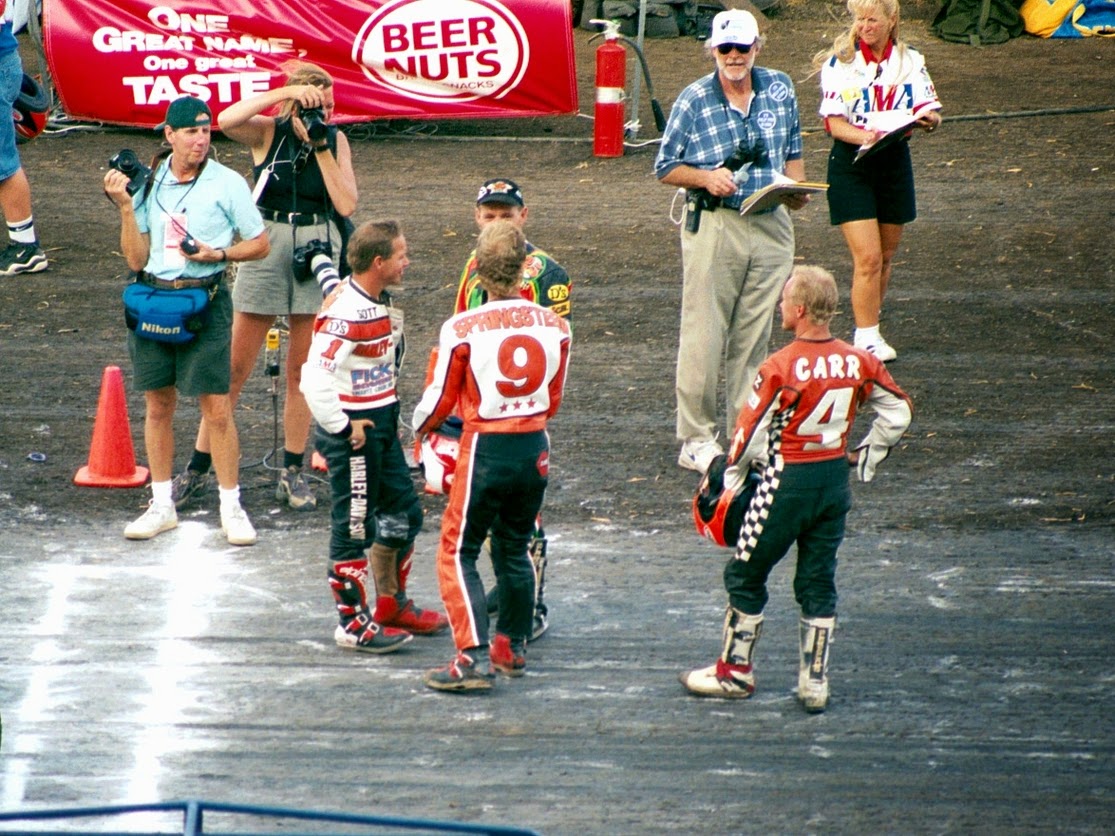 With round 8 of the 2014 AMA Pro Flat Track Grand National Championship at the Sacramento Mile just over two weeks off, the folks at SMI, the promoters of the resurrected Sacto Mile have taken some time to talk to one of the 'old horses' of the sport to look back at some of the long-standing history from this great west coast event.

In the early '80s, 3-Time AMA Grand National Champion Jay Springsteen was still having problems on and off with the stomach illness that kept him from possibly winning four or more AMA Grand National Championships, and was back to do battle in round 5 of the Winston Pro Series as the The Rolling Thunder Show hit up the Sacto Mile for the first mile event of the season.

From the shot above, Springer can be seen talking with a few other notables of the sport, during the rider intros portion of the first AMA Pro Flat Track Hall of Fame Race at the Springfield Mile over the Labor Day weekend in 1998, a race that was conjured up by former announcer and all-around motorcycle guy Dave Despain. Seen in the shot are eventual 9-Time AMA Grand National Champion Scott Parker, Springer talking with now AMA Pro Flat Track event manager Steve 'The Findlay Flyer' Morehead, and eventual 7-Time AMA Grand National Champion Chris Carr. Despain, who not only acted as the man that put this great event together and helped raise the $100K purse to go along with it, was also the announcer for the event and can be seen 'listening in' in the background as the shutter bugs on hand shoot away at the meeting of the legends to be on the front straight at the Illinois State Fairgrounds mile oval.

Read on below to see what Springer had to do and eventually did to take over the all-time wins list at the Sacto Mile in April '82, and get ready to see some of the best racing ever on the left coast as the stars of the greatest racing show on two wheels in the world get ready to head to Sacramento on July 26 for what will truly be a night under the stars and a track full of stars for round 8 of the AMA Grand National Championship.


Press release courtesy of SMI, the promoters of The Sacramento Mile.

When “Springer” became all-time AMA Grand National Wins Leader
SACRAMENTO, Calif. (July 9, 2014) – The memories of the night at Cal Expo 32 years ago aren’t crystal  clear, but Jay Springsteen does recall one thing in particular. “Ricky Graham, Bubba Shobert, Scotty Parker, I mean there were some fast guys back then,” Springsteen said.  “It was so competitive back then. If you made the main event in those days, you were good enough that you had an opportunity to win.”
On an April night in 1982 Springsteen made history. His victory at that year’s Sacramento Mile was his 30th-career AMA Grand National win and it was a milestone victory. That evening in Sacramento Springsteen moved past the legendary Kenny Roberts to become the all-time wins leader in AMA Grand National history.
But let’s back up a moment and consider the scope of Springsteen’s achievement.
During his record-setting career in the 1950s and early ‘60s the legendary Joe Leonard established the mark that all other racers aspired to when he won 27-career AMA Nationals.
Leonard’s record held for a decade until Bart Markel finally broke it in Columbus, Ohio, in 1971, by taking his 28th AMA National victory. Markel scored that win just in the nick of time because it proved to be his final career victory.
Modesto, California’s, Kenny Roberts then roared through the 1970s and at Laguna Seca Raceway in Monterey, California, in August of 1980, when he was in the middle of winning his first FIM 500cc Grand Prix Championship overseas, Roberts found the time to come back home and score his 29th-career AMA National victory to establish a new record.
Roberts’ all-time record would prove to be fairly short-lived. Already on the scene was one of the most talented flat trackers the sport ever produced, Jay Springsteen, who emerged, ironically from the same hometown of Markel’s, Flint, Michigan, and starting in 1975 began building his own long list of AMA National wins. In February of 1982, Springsteen tied Roberts’ all-time record by taking his 29th-career victory in the season-opening AMA Grand National Short Track in the Houston Astrodome.
Anticipation was high for “Springer” finally hitting the 30-win mark, but it would have to wait. Springsteen was going through one of his bouts with a mysterious stomach ailment and missed some following races. Meanwhile Ricky Graham won the TT National in the Astrodome. Then New Zealand’s Graeme Crosby won the Daytona 200 and Stockton, California’s Alex Jorgensen took the TT victory at Ascot Park in Gardena, California.
The Sacramento Mile was round five of what was then known as the Winston Pro Series. It was the first Mile of the ’82 season and it was a tossup as to who would win. In the five AMA Grand National Miles the preceding season there were five different winners. So there was no clear-cut favorite that April evening at Cal Expo. 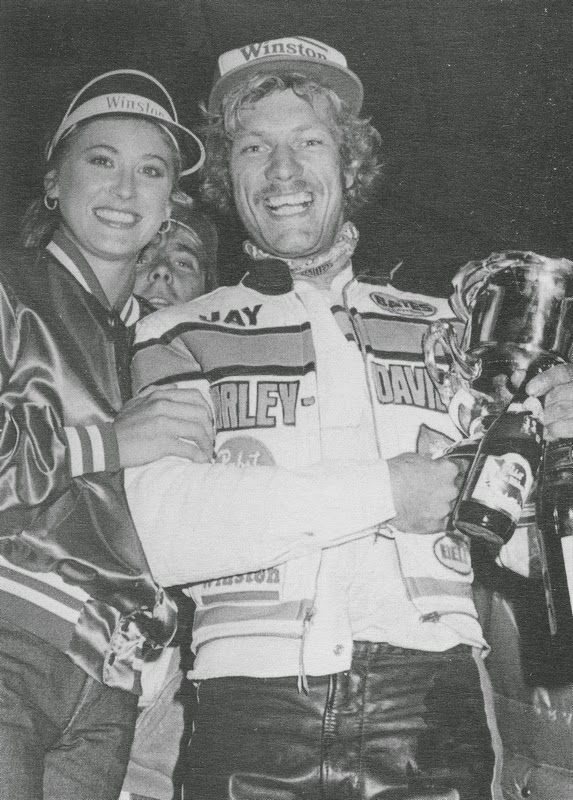 Jay Springsteen was all smiles after breaking the 29-race win record set by Kenny Roberts. Springsteen was the first rider in AMA Grand National history to reach the 30-win mark.  Even today Springsteen is ranked third on the all-time wins list behind only Scott Parker and Chris Carr. Photo courtesy of The Sacramento Mile.
Springsteen came back to race, healthy and ready to go for Sacramento.
Ricky Graham opened the program at the ’82 Sacramento Mile by breaking a lap record in qualifying, clocking a 38.51-second lap on his Tex Peel-tuned Harley-Davidson XR750. Springsteen, Lance Jones and Terry Poovey rounded out the fast qualifiers and would start from pole in their respective Heat races.
Springsteen won his Heat race on his Bill Werner-tuned factory Harley-Davidson, but he would start second in the main event to Graham, who won the fastest of the qualifying races.
At the start of the 25-lap National it was Graham leading the first lap, but Springer drafted past him to take over the lead on lap two. Werner had gotten the set-up on Springsteen’s bike perfect and he was able to actually put some breathing room between himself and the rest of the field. But then Graham rallied. He caught and passed Springer on lap 14 and the two would engage in a bar-to-bar battle the rest of the way.
It came down to the final lap. Springsteen led as the two took the white flag. Then it was Graham taking over coming off the back straight into turn three. Out the final corner Springsteen made the classic last-lap move on the Mile. He got a great drive coming off turn four and slipstreamed past Graham just before the line to finally reach that 30-win mark - and he did it by mere inches.
Graham could only shake his head and smile at being outfoxed by his more experienced rival. “I thought I was doing the right thing,” Graham said on the podium. “Every time I passed Jay going down the back straight he wouldn’t catch my draft until turn one. So I figured if I could do that (on the final lap) he wouldn’t have time to catch the draft until after the start-finish line. I guess I judged it wrong.”
All these years later Springsteen remembers making that last-second pass on Graham. "Sacramento has long straights and the finish line was a long ways down,” he said. “I got sucked into Ricky’s draft and the only thing I was worried about was getting off the blue groove. If I’d gotten off that line when I passed him I would have been in the marbles and probably wouldn’t have held on.”
Looking back on the record-breaking win now Springsteen said he was proud he did it at Sacramento and against a rider of Ricky Graham’s caliber. “Whenever people ask me who the toughest racer I ever went up against Ricky is right there at the top,” Springsteen said. “He was a natural racer, just like me. Ricky was a good rider, he was smart and that’s why he won a lot of races. “
Fast forward 32 years and Springsteen will be back in Sacramento to be honored, along with fellow former factory Harley-Davidson rider Chris Carr, on race day July 26, as two living legends of the sport. Springer and Carr will be on the track together again in a friendly showdown exhibition ride around the historic Cal Expo Mile. “I’m looking forward to coming back to the Sacramento Mile. My leathers have been hanging up all these years and they’ve shrunk a little bit. I don’t know what the deal is,” Springsteen joked. “Chris and are going to have some fun and I just hope he respects his elders, you know what I mean?”
Practice for the Sacramento Mile begins at on Saturday, July 26 at 2:15 p.m. and opening ceremonies for the evening program kicks off at 6:15 p.m.
Visit us at: http://www.sactomile.com/
Via Facebook: https://www.facebook.com/SactoMile
Twitter: https://twitter.com/sactomile
YouTube: http://www.youtube.com/user/sactomile —
*** 2014 Ticket Information: Ticket information is available for the July 26, 2014 Sacramento Mile at www.sactomile.com.
Fans can order tickets online  at https://secure.interactiveticketing.com/a/c84136, by calling 1-844 SAC MILE (1-844- 722-6453) or by visiting the Cal Expo Ticket Box Office in the Administration Building at 1600 Exposition Blvd., Sacramento, CA 95815 from 10 a.m.-5 p.m. (PT) Monday through Friday. Tickets can also be purchased at any ticket window during the 2014 California State Fair.
Tickets for groups of 20 or more also are available. Contact the Cal Expo Group Sales Department at boxoffice@calexpo.com for more information.
#
Larry Lawrence
o. (317) 852-2896
c. (317) 332-3899
www.SactoMile.com
lawrencemedia@hotmail.com 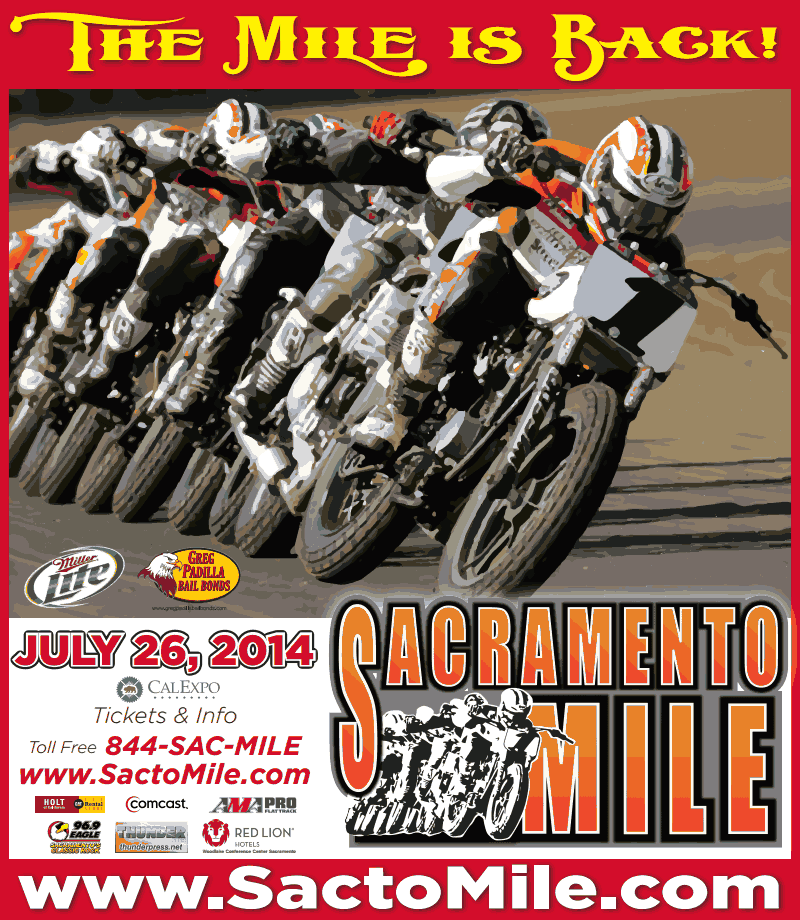