Colorado Springs, December 12, 2013--Though the famed Pikes Peak International Hill Climb is still months away, drivers and motorcycle racers are registering at a fast pace.
The 92nd edition of the Race to the Clouds on Pikes Peak, America’s Mountain, will take place on Sunday, June 29 and already, 31 automobiles and 15 motorcycles and their competitors have registered to take part. All registrations, as always are subject to approval by the PPIHC Race Committee.
The high profile Unlimited Division has six registrations submitted, including Mark Rennison of Great Britain, who was fourth last year in the division that became legend when French driver Sebastien Loeb drove his 2013 Peugeot 208 T16 Pikes Peak edition to the all-time record of a stunning 8:13.878. 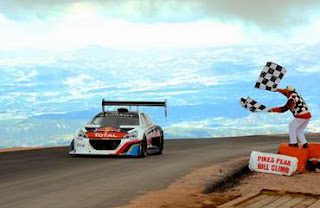