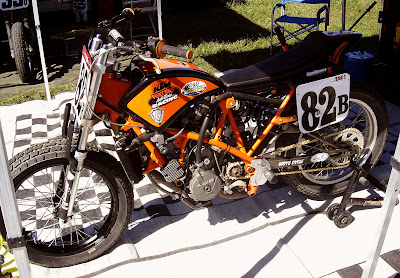 Jeremy Higgins' #82B Waters Autobody Racing/Power Sports Institute/Arlen Ness Leathers/Bell Helmets-sponsored KTM LC8-based Twins Series mount sits in the Waters Autobody Racing pit area at round 14 of the 2010 AMA Pro Flat Track K&N Filters Grand National Championship presented by Motorcycle-Superstore.com season at the Springfield Mile II on September 5.  The rookie Expert would go on to put the KTM in the field at the Canterbury Park, MN. and Yvapait, AZ. II mile events at the end of the season, earning his National #82 which he wore during the 2011 season.

Higgins and team mate Chad Cose split time on the KTMs and Suzukis during the '10 and '11 season, which seemed to hold them and the team back in overall results.  Cose announced over the off-season he was starting his own team, Chad Cose Racing, and the Waters Autobody team added Kansas-based rider Steve Murray to their 2012 AMA Pro Flat Track Harley-Davidson Insurance Grand National Championship presented by Motorcycle-Superstore.com season line-up.

Murray and Higgins will now concentrate solely on development with the KTM LC8 Twin motor for the 11 Twins Series events scheduled for this season.  Waters announced they will be putting the Suzukis on the backburner for the time being, allowing them to concentrate further efforts into the big KTM.  And with yesterday's announcement that KTM North America will be helping the team out with sponsorship, it should be a big help to everyone on the New York State-based outfit.

You can read the full press release below on the great news ahead, and you can see Jeremy Higgins #82 and Steve Murray #51 carrying the Waters Autobody KTM livery at the first Twins Series event of the season in 22 days, at the Springfield Mile I on May 27.

Team owners, Dave and Rhonda Waters, have been working diligently to establish a KTM presence in the realm of flat track racing since the team’s inception in 2008.  Being a fledging privateer team among so many well established has proven to be a challenge, but with KTM’s assistance, Waters is confident that the durability and performance of the LC8 motors will be a key factor in the quest for the Grand National Championship. The water-cooled, 4-stroke, 75° V-Twin arrangement is used in the 2012 990 Adventure, 990 Adventure R and 990 Supermoto T.

New York native and team rider, Jeremy Higgins, has been instrumental in developing the flat track machines for the past several years.  He is joined by seasoned veteran Steve Murray from Kansas City, MI.  Murray has the knowledge and experience to provide necessary feedback to further develop the LC8 powered machines.  Dealership support will be provided by Scott PowerSports, Inc. from Coopersburg, PA. 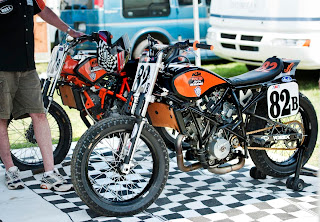 Brad Hagi, Vice President of Sales for KTM North America, Inc. remarked,  “KTM is very excited to work with the Waters Autobody/Project K Racing Team this season.  We see the amount of hard work they put into creating a successful flat track racing team and we are happy we can help assist their program and are proud to be a key sponsor to their 2012 racing efforts.”

The Waters Autobody/Project K Racing Team will make its 2012 debut at the first AMA Pro Flat Track Expert Twins round at the famed Springfield Mile at the Illinois State Fairgrounds on May 27, 2012.