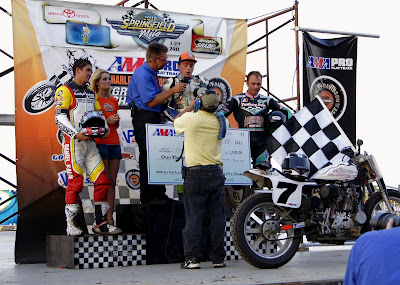 Sammy Halbert #7 gets the check for the win at the Springfield Mile Dash for Cash event, as 3rd place finisher Brad Baker #12 and runner-up Bryan Smith #42 reflect on the race at the end of the day in round 6 of the 2011 AMA Pro Flat Track Harley-Davidson Insurance Grand National Championship Series over the Memorial Day Weekend on May 29.  The same three men were in the Dash event again last Saturday at the Allen County Fairgrounds in Lima, OH., but with different end results.  Smith grabbed the win on his #42 Moroney's Fasthog.com/American H-D/Rockyonline.com/Boughner Racing-sponsored XR while Halbert and Baker followed him home.

For round 9 last Saturday's main event on the pea gravel/limestone cushion track, Sammy Halbert on the #7 Kings Kustoms/LZ Racing/KK Supply/Nelson Racing-sponsored H-D XR-750 followed early leader Smith, and then went on to pass him and pull off his 3rd win of the season over eventual 2nd place finisher and cushion track specialist, Matt Weidman #20 (more on Matt below.)  Smith secured 3rd in the main while holding off Brad Baker on the #12 Lloyd Brothers Motorsports/TeamHurtbyAccident.com/Foremost Insurance/ENI USA-backed Ducati.  Jared Mees, on the #9 Rogers Lake Racing XR rounded out the top 5.  Defending '10 AMA Grand National Champion Jake Johnson had an 'off-night' by his normal standards, but still brought his #1 Zanotti Racing Harley-Davidson XR-750 home in the 8th spot.

It was definitely Slammin Sammy's night at Lima, and except for his 2nd place in the Dash event, he had a perfect night in qualifying fastest, winning the fastest heat to garner the pole for the main, and going on to win over Weidman by 1.183 seconds and take his 3rd overall win of the year (and first since the Daytona season-openers in March.)  Sammy stretched his lead in the overall standings on runner-up Johnson by 16 more points after his Lima win (186-161), with Jared Mees (the winner of both previous Twins Series events on the year at Springfield & Hartford) now a solid 3rd in the standings with 155 points.

Former 3-Time Grand National Twins Champ (and '07 Singles Series Champ) Kenny Coolbeth, Jr., brought his #2 Screamin Eagle Factory Harley-Davidson XR-750 home in the 6th spot at Lima to help secure 4th in the overall standings after 9 rounds with 136 points.  Rookie of the Year candidate Baker, showing the guts and glory that took him to the '09 Pro Singles Championship and runner-up in last year's Pro Singles standings, still sits a solid 5th in the overall picture with 119 points.  Baker was making the cushion work for him and the big Ducati according to those on the scene at Lima, and his lap times on the AMA Live Timing & Scoring were right there with the leaders.  It's just a matter of time before he puts the LBM Ducati on the top of the box! 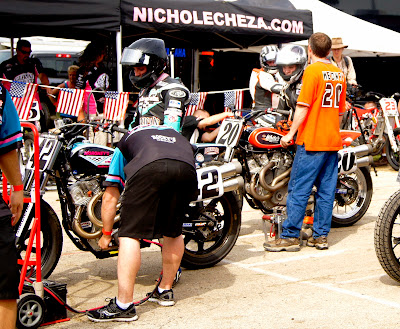 Bryan Smith gets his #42 Moroney's Fasthog.com/American H-D/Rockyonline.com/Boughner Racing-sponsored H-D XR-750 fired up and ready to go during the race weekend at the Springfield Mile on May 29, as Matt Weidman ponders the moment along with his Dad, Guy, before the he rolls out on his #20 White's Harley-Davidson/SNIP/Shoei/Silkolene-sponsored XR for round 6 of the 2011 AMA Pro Flat Track Harley-Davidson Insurance Grand National Championship Series.

Smith, who just after the Daytona season openers split from his last-year's team, the Werner-Springsteen Monster Energy Kawasaki, is now calling the shots for his Moroney's-backed team after spending the 2010 season riding the Big Green Machine.  Sporting new colors and new versions of his own equipment at Springfield, Smith broke in the main after winning his heat, and then came back to 2nd in the Dash at the end of the rain-delayed program on May 29.

Things have seemed to come together for this hard charger from Michigan as he now has two, 3rd-place finishes in the last two rounds, as well as his Dash win from last Saturday at Lima.  He's moved himself into the 11th spot in the overall standings with 60 points.  It may be too late to go for the championship at this point, but don't be surprised to see Flyin Bryan on top of the box before too long.

With everyone on the box at Lima having moved up one spot from their previous year's event finishes ('10 Lima winner Henry Wiles #17 is still out and looking to return by Peoria in August), Matt Weidman is one rider who probably wishes he had had a few more laps to race at Lima last Saturday.  Turning some of the fastest laps of the night towards the end of the main, Matt didn't let his 2nd row start deter him in getting to the front.  This fine hard-charger has Lima figured out, and with his cushion track background, maybe 2012 will move him up another spot.

Here's Larry Lawrence's coverage of the action at Lima over at Cycle News.com:

And here is the link to the full story of the race at Lima, again thanks to Larry Lawrence and Cycle News.com:

Bryan Harley was on the scene at Lima and posted this story of the race for Motorcycle-USA.com:

Here's the link to the results for round 9 of the 2011 AMA Pro Flat Track Harley-Davidson Insurance Grand National Championship Series from Lima, OH. (standard versions):

And thanks again to AMA Pro Flat Track for this link to the complete event results from Saturday's Lima Half-Mile event (PDF versions):

Jim Grant has been following AMA Flat Track racing for years, and if you haven't checked out his stuff, now is the time to do so (he also does a SUPER job of shooting the races!)  Here's the link to Jim's JGPhotowerx site with his event shots from Lima:

Jim's official website is here, and you can check out his catalog from other AMA Pro Flat Track Series events:

You can take a look at the event photos here, thanks to AMA Pro Flat Track and official photographer, Dave Hoenig:

And here's Dave's official site, Flat Trak Fotos.com, which has the complete event results as well as his extensive catalog of shots from Lima (Dave usually posts his photos several days after each event):

While on the scene at Lima for Cycle News.com, Larry Lawrence shot this great pic of 2nd place man Matt Weidman #20.  LL has this one on his great site, The Rider Files.com:

Mia Moore and Kevin 'Chew' Larcom shot some awesome stuff at Lima for their part in being the best Fans in the Stands at FlatTrack.com.  Check 'em out: