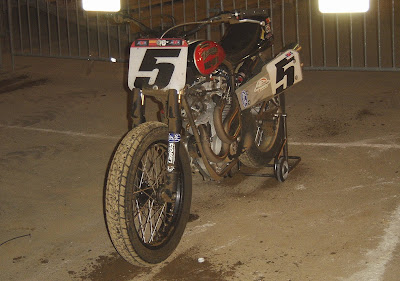 In what was a stellar year for fans and competitors alike, the 2010 AMA Pro Flat Track K&N Filters presented by Motorcycle Superstore.com Grand National Championship season saw new winners, new competition and new faces in the series to add to the great turn around that the series is seeing. But when the year was done and said, long-time competitor Jake Johnson and the Zanotti Racing team took home all of the honors while doing so with one of the legends of the sport, the Harley-Davidson XR750. With all of the 'new' in the series for this season, the final say-so went to a machine that has been competing in the series since the early '70s, showing everyone that the 'iron-clad' alloy XR isn't quite ready for the museum as of yet, restrictors or not!

Teaming together in the off-season last year, Jake Johnson and Zanotti Racing formed the perfect match to win the big marbles in AMA Flat Track Racing, and in doing so also showed how strong their team and rider were throughout the season by taking home 3 wins, only one finish on the year outside the top ten, and zero DNF's due to rider or mechanical failure. Talk about a near-dream season.

The great folks at Motorcycle-USA.com and The Fast and Dirty.com have teamed up to bring us this great season ending video from the Yavapai Downs Mile in Prescott Valley, AZ., and we get a chance to see and hear from some of the racers during round 16 of the 2010 season. Jake Johnson takes some time to reflect on the season, and ultimately the #1 plate as he wins the race over Jared Mees, the defending AMA Flat Track Grand National Twins Champion, by a scant .004 seconds to go out on top and collect the 2010 AMA Flat Track Grand National Championship for himself and Zanotti Racing.

You can check out the season-ending highlights right here and hear Jersey Jake reflect on the run-up to the season ender, and the result of winning it all. Congrats again to Jake Johnson and Zanotti Racing for a great championship season. I can't wait for 2011!