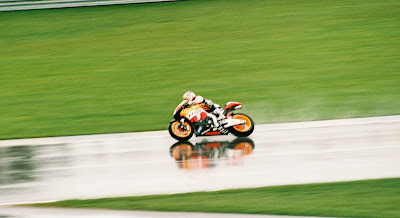 As a result of the all-but-complete wash-out from this morning's session, and free practice session 2 not being run under prime conditions, Dorna has extended tomorrow morning's free practice session 3 to 60 minutes from the standard 45 minutes. Portugal and Valencia (next weekend's final 2010 stop on the MotoGP season) were given an extra practice session to help the teams to better utilize optimum time on the track, but all sessions were also cut-back from the 'old' 60 minute timed sessions to 45 minute sessions.

With the 2010 MotoGP World Championship having been decided two rounds ago in Malaysia, the final two rounds are all about 'who else finishes where' in the other top spots for the season. Ben Spies sewed up the 2010 MotoGP Rookie of the Year title after the last round at Philip Island, but the remaining spots in the top ten in the series are still up-for-grabs with the rest of pack. And those final numbers will be tantamount in establishing the rest of the hierarchy for the 2011 MotoGP season, on AND off the track.

Free practice 1 was all but a total wash out due to torrential rains in the area, thunder and lightning all around the track in Estoril:

http://motomatters.com/results/2010/10/29/2010_estoril_125cc_motogp_result_session.html
Free practice 2 went much better especially over half-way through the session at the Portugal round as the track was drying. Both Portugal and Valencia (next weekend's final round for the season) were given an extra session due to lack of quality track time that the teams weren't getting over the weekend, but session times were reduced from 60 to 45 minutes:

http://motomatters.com/results/2010/10/29/2010_estoril_motogp_fp2_result_lorenzo_l.html
Tomorrow's free practice 3 session has also been extended to an hour to give the teams a little bit more time to help find the right set-up with today's first session being a total loss. Here is the updated schedule for tomorrow in Portugal:

As always, you can follow all of the race action this weekend on MotoGP's official site, MotoGP.com. Here is the link for not only the schedule but the link to MotoGP's Live Timing as well: