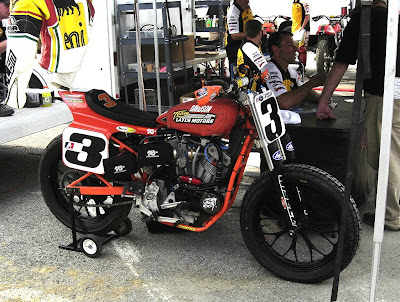 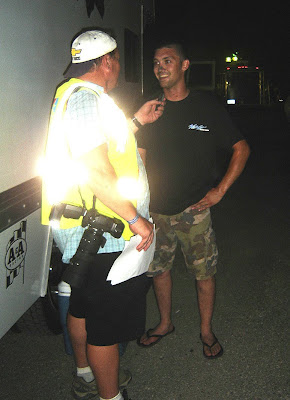 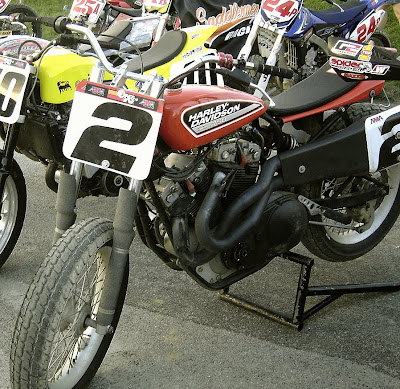 
The AMA Pro K&N Filters Grand National Championship presented by Motorcycle-Superstore.com circus rolled into the Hagerstown Speedway in Maryland last Saturday as the traveling road show made the almost-3000 mile trek east after the Calistoga round the weekend before.

For the third time this year, 2000 AMA Grand National Champion Smokin Joe Kopp stood on the top of the box at the end of the evening after a fast, furious and hot race at the classic east coast running of the half mile race with his Latus-backed #3 machine. Dicing with former 3-Time Twins Champ Kenny Coolbeth, Jr., on the H-D Factory-backed #2 XR throughout the event for the lead, Kopp was able to pull off his third win of the year on his Latus H-D to go along with his Odessa win and his Arizona win on the Lloyd Bros. Ducati. The King of Cool was able to keep it within .974 seconds at the end of the 25 lap main event after a fine battle at the front.
Kopp led the most laps and takes a strong 18 point lead in the AMA Flat Track Grand National Championship overall standings. He is trailed by former 2-Time Singles Champ Jake Johnson #5 and Sammy Halbert #7 in the standings, who are actually tied for 2nd at 175 points each. Johnson holds the edge between the two riders at this point due to his two series wins to Sammy's one series win earlier in the season.

Defending AMA Pro Flat Track Twins Champion Jared Mees on his #1 Rogers Lake/Blue Springs H-D/Rockysonline.com-backed H-D XR750 finished on the last step of the podium 2.420 seconds back from Kopp, and moved up to fourth in the overall championship standings with 164 points, 29 behind Kopp. Rob Pearson on his #27 Snedeker/Stratton Racing/WKR/Peoria Motorcycle Club-backed XR finished in the fourth spot, and Sammy Halbert on the #7 Kings Kustoms/KK Motorcycle Supply/Nelson Racing-sponsored XR nailed down 5th place.

The series takes a two week break, due to the cancellation of the Grove City, OH. round that was to have run on August 14. Racing action resumes at the infamous Peoria Motorcycle Club arena on Sunday August 22 for the 62nd annual running of the Peoria TT.

Check out all of the official rundowns from the race below. And stay tuned for Peoria in 13 days--it's always a hot August day in the natural arena and Henry Wiles, the defending AMA Grand National Singles Champion, has a big-time streak going on in the singles series, not only at Peoria, but on the singles tracks themselves that are held in the Illini State. And he's looking to improve on his 6th place in the overall championship (160 points) with a good run at the famed Peoria track. It should be fun and we'll have all the action and results!

Here's the official story of the race thanks to Dave Hoenig and AMA Pro Flat Track:

Motorcycle-USA.com had Matt Davidson on the scene at Hagerstown and here is their spin on the race:

And here's Dave's official site, Flat Trak Fotos.com that has the results from Hagerstown and soon-to-be-posted (as of this writing) photos from the event:

And last, but not least, here is the press release rundown from the great people at Flat Track Today.com (more to be added as the week goes on from these great folks):