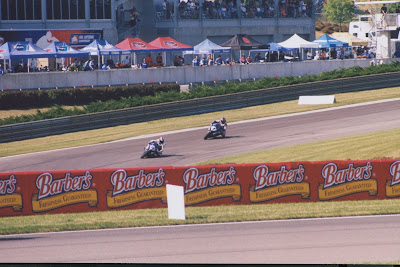 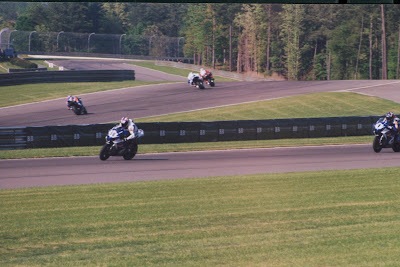 As we begin to get into the thick of the motorcycle road racing seasons
in the AMA American Superbike Series as well as the World Superbike Series,
two names keep coming to the top in both.
Having fought one another tooth and nail for the previous three years in America
in the AMA Superbike Series, Mat Mladin and Ben Spies are both setting and maintaining
new records in their quests to win a 7th AMA title and 1st WSBK title, respectively.
Yesterday at Infineon Raceway in Sonoma, CA., Mad Mat took his series-leading title
venture to another, and not surprising, level in winning the 5th SuperPole session of the year
in the new AMA American SuperBike Series. This morning, Ben 'Elbowz' Spies took his
World Superbike-leading 6th SuperPole win at the South African round of the WSBK Series.

Both riders, besting a field of multi-talented and race-winning riders, managed to pull off
another milestone in each of their series to lead their fields off the line in each of their w/e's
upcoming races.
You can follow Mat's ventures via the link below in the AMA series at Infineon this w/e. This
afternoon's race starts at 3 P.M. west coast time and tomorrow's race at 4 P.M. west coast time:

....and you can get the live timing link here as well:

As for following Mr. Spies venture at Kyalami in South Africa, tomorrow's races are at 6 A.M. and 9:30 A.M. east coast time. The link is below and the live timing is located on the right side
of the Official WSBK website:

The shots we view as we keep up on their exploits were taken at the beautiful Barber
Motorsports Park in Leeds, AL., just outside of Birmingham, at the AMA round in April
of '07. In both we see Elbowz chasing Mad Mat in both shots, as he did in both races that
particular w/e, while defending and ultimately winning his 2nd of 3 AMA Superbike Championships.

Good luck to both Mr. Spies and Mr. Mladin in their quests to show the U.S. and the World as
to really who is top man in each of their indicidual series they are competing in this year.
It just doesn't get any better than on 2 wheels!
Posted by Stuman714 in Indy at 12:41 PM